Marching Band Heads to Penn State for First Time Since 2005

Marching Band Heads to Penn State for First Time Since 2005 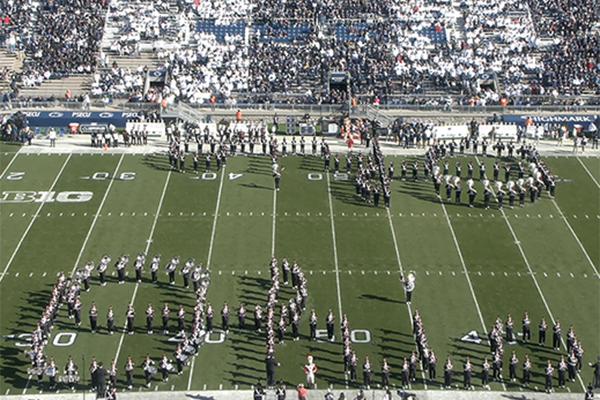 For the first time in 17 years, The Ohio State University Marching Band traveled to Penn State for a game on Saturday.

The band performed at pregame and at halftime with an abbreviated version of its standard road pregame routine as well as Parts 1 and 2 of the "Buckeye Jazz Café" halftime show originally performed at the Notre Dame game on Sept. 3.

The halftime show can be viewed on YouTube below. The band played "Sing, Sing, Sing" as well as "On Fire" at halftime.

At pregame, the band began with its "Floating Ohio" routine as an entrance and immediately jumped into a Double Script Ohio. This was the band's first Double Script of the year. The i-dotters were Avery Voress (far side) and Bradley Krak (near side). Head drum major Austin Bowman led Avery's script while assistant drum major Dalton Cararo led Bradley's.