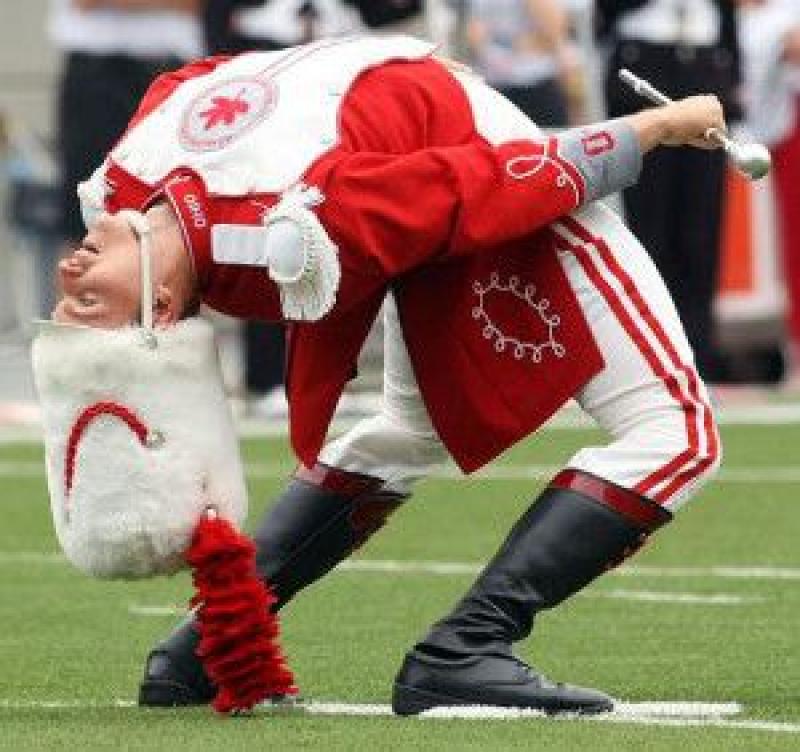 Kyle West got his start at twirling when he was hand-selected to be drum major of Lakewood High School by former Ohio State drum major Josh Halter and high school band director Scott Coffey.

“I was skeptical at first, but it turns out I had a talent for it and learned quickly.”

As part of his training, West participated as drum major in the All-Ohio State Fair Band with Jason Stuckert (drum major, 2010-2011).

“I performed around five to eight times a day, with each performance having five or six twirling numbers, ending with a combined parade and concert. Fair Band was a great experience.”

Kyle first was a member of D-Row in 2009. After not making the drum major or assistant in positions in that spring’s tryouts, Kyle tried out on sousaphone and made the band in KL-Row in 2010. However, he kept the dream of becoming drum major alive.

“I had to sacrifice the summer and fall of practicing, but I worked my butt off in the winter and spring and won assistant drum major in my junior year.”

West was selected as head drum major in 2012, beating out nine other competitors. West’s season as drum major was underscored when he and entire band gave an outstanding performance in the now-famous video game-themed show, which went viral online.

“Everything came together beautifully that night. I had a perfect performance personally, the show was perfect, and the crowd reaction was out of this world. It was a truly electrifying night to say the least.”

In pursuing the position of drum major at Ohio State, the competition can be very intense. “Sometimes we end up overworking ourselves to make sure we are the best. I ended up strutting too much before my first drum major tryout and ended up hurting my knee, which is an injury that still affects my athleticism to this day,” said West. Kyle also struggled to find his own style while still upholding Ohio State’s drum major traditions.

“People have always been trying to change who I am to get to this position. But, I learned the spot is earned by having confidence in yourself, having a dedicated, productive, and consistent practice regiment, and bringing your ‘A-game’ in performances.”

“I have a pretty good idea of how you should train in order to become a better athlete, and I’m trying to apply these methods in terms of drum majoring, because I think that’s something that can be improved upon.”