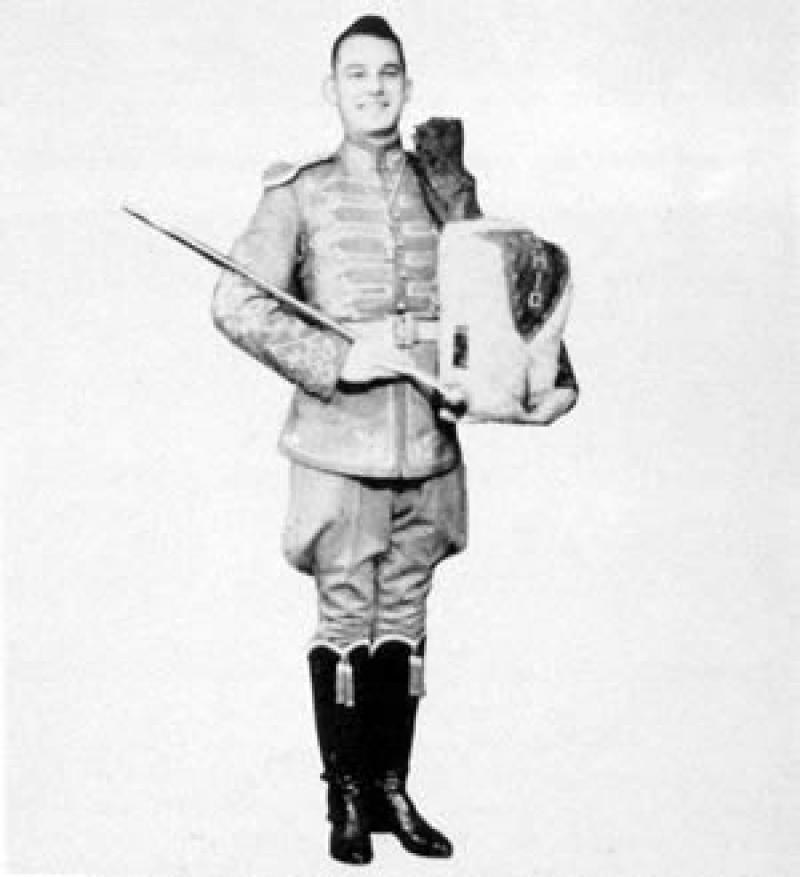 When Myron St. Clair McKelvey (OSUMB 1938) tried out for drum major as a freshman, he tied Wesley Leas the first time down the field. He was beaten the second time, but he won as a junior in a race of 13 candidates. The baton he used was made by a machinist, Ben Wright, who operated a private machine shop in Hamilton, Ohio. The shaft was 36 inches long with spiraled grooves — heavy enough to withstand the strong winds in Ohio Stadium. It was a 3/4-inch diameter steel tube, with chrome-plated ferrule and ball.

McKelvey was extremely accurate and confident and he led the band wearing what he called "the lion-tamer suit."

His expertise involved a special maneuver when he made the goalpost toss. "I believe that I was the only OSU drum major ever to pass the baton through the fingers, down the right leg and up over the goalpost crossbar," he said. "I did this toss successfully in the Texas Christian game. I tried it at the Southern California game and got it high enough but not far enough through. When the ferrule came down, it landed directly on the crossbar and bounced forward — just out of reach. I know how it feels to hear 80,000 people moan 'awwwww'! I was kindly requested by the Director not to try it again in a game. From then on I used my traditional throw which I never missed in the 1938 season," McKelvey said.

After 14 successful years in musical education, he made an easy transition to teaching mathematics and health in the Kettering (Ohio) Jr. High School, as well as teaching tool and design making at a local trade school. He taught there for 22 years and is now retired, living in Naples, Florida "on the 15th hole of the Lakewood Country Club." He keeps busy by teaching children with mental disabilities at the local high school and the useful vocation of bee-keeping. He also teaches Mexican migrant children to speak English.

Since foreign languages come easy to McKelvey, he has traveled widely and has even adopted a little Mayan Indian girl in Chichicastenago, Guatemala.