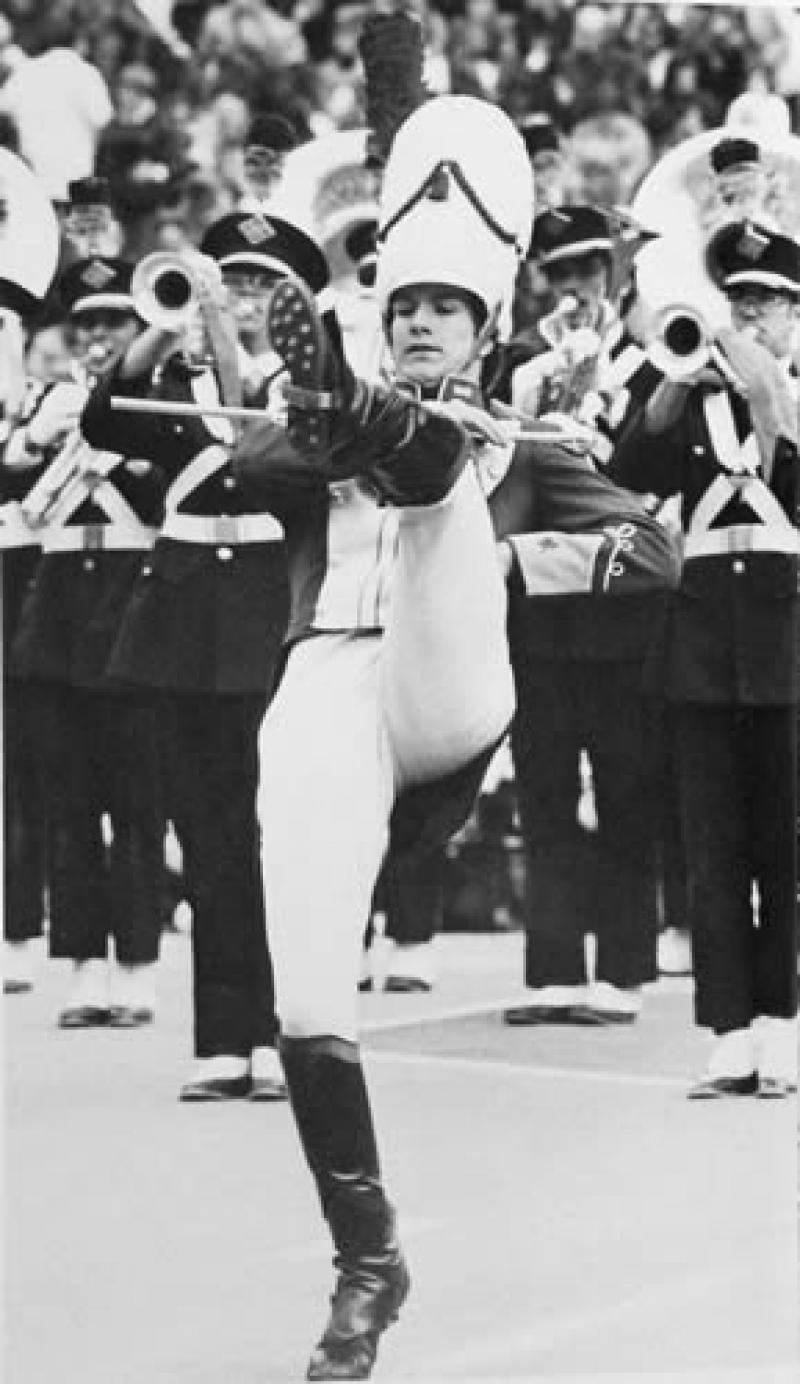 "I attended my first OSU football game with my father as an eighth grade junior high football player aspiring one day to be playing on the famed Buckeye gridiron," said Rick Gammage (OSUMB drum major 1974-75). "My father, being a former high school and college drum major, was excitedly anticipating the pregame band show as we approached the gray horseshoe for the OSU-Arizona game. I remember thinking, 'So what if we miss the pregame?' Later as we sat up on C-deck, my dad explained what was happening as the ramp entrance was being executed. Even though I had no aspirations whatsoever along the lines of drum majoring, I sensed the anticipation amidst the crowd awaiting the drum major's entrance.

"As if this spectacle wasn't enough, onto the field marched hundreds of proud alumni bandsmen. They then announced the alumni drum majors. When Deve Kesling was announced, my father was aghast. While an OSU medical student, he had seen Kesling as drum major and raved about him. He couldn't believe that was him now. Kesling attempted a strut and fell back behind the others as the crowd laughed. He then began spinning in circles with the baton going all around him and the crowd went wild.

"Little did I know at the time, that I would reach my goal of one day playing on that gridiron, but not as a football player, but as the drum major. Who would have guessed that I would be traveling to Dallas to learn and practice with the showman down on the field (Kesling). Even more remarkable was the irony of my going to the University of Arizona on a drum major scholarship after my years at OSU.

"My inspiration for drum majoring came into my sights from an article called The Man Up Front, written by Beverley Moseley (OSUMB drum major 1946), which appeared in the Columbus Dispatch magazine and elaborated on the OSU drum major tradition. As a senior in high school, I began taking lessons from Paul Zubrod (OSUMB drum major 1971).

"After achieving the goal of becoming the drum major, I realized I needed another goal. I set out to do more tricks each game for the value of variety and personal challenge. The one that carried the most pressure was in my last home game. Knowing I would not have a chance to make up for a miss, I threw the baton from behind my back, over the goal post and caught it behind my back, just inches away from the ROTC flag bearers.

"I always enjoyed those performances best where there was an audience up close, the most memorable one being when I twirled the fire baton in Mershon Auditorium. I remember thinking, 'even if I catch myself on fire, I'm going out there and bring some enjoyment to these people today,' " said Gammage.

"The opportunity to be a part of and build on the rich heritage as drum major was an unforgettable experience for me," said Gammage. "While I treasure those moments on field and stage, it was the interaction with the 'Ohio State family' and the warm friendships that grew with many of drum major alumni, which made this era in my life even more special," said Gammage.