The Ohio State University Athletic Band performs at various Ohio State varsity sporting events during the autumn and spring semesters, with the exception of fall football games. The number of participants in Athletic Band each semester varies between 250-300 members.

Unlike the Marching Band, the Athletic Band includes all brass, woodwind and percussion instruments. Athletic Band is an open-enrollment ensemble, meaning anyone is welcome to participate. 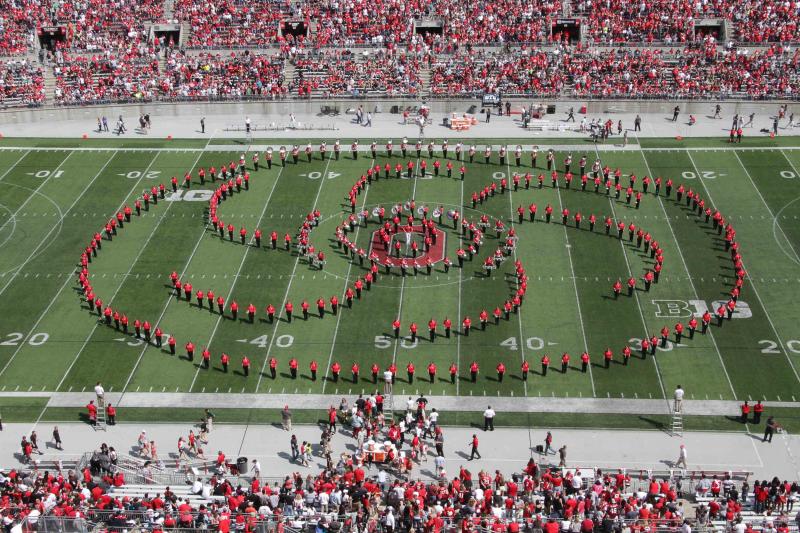 How do I join the Athletic Band?

Joining athletic band is simple…just sign up for the class through BuckeyeLink! Talk to your advisor if you have any questions.

What is the class number for Athletic Band?

What is the instrumentation of the Athletic Band?

Woodwinds, brass and percussion instruments are all included in Athletic Band.

At which events does the Athletic Band typically perform?

Can I check out an instrument to use for Athletic Band? If so, does it cost me anything?

Brass and percussion instruments are available to check out for Athletic Band use at no charge. Unfortunately, we do not have an inventory of woodwind instruments or accessories. Students are responsible for lost or damaged instruments.

Does the Athletic Band ever travel?

Athletic Band members do get the chance to travel to tournament games for certain sporting events. The directors will determine travel bands based on students' Athletic Band seniority and availability. The entire Athletic Band has the opportunity to travel to Cedar Point to perform for Ohio State Day in May of each year.

The fall Athletic Band performs at many different sporting events throughout the fall semester, including volleyball, hockey, and men’s and women’s basketball games. Rehearsals are every Monday and Wednesday beginning the first week of class from 6:30-8:35 p.m.* in the Steinbrenner Band Center (times subject to change).

The spring Athletic Band performs at hockey games, women’s basketball games and various other spring athletic events. In addition, there is a smaller, auditioned group that performs at the home men’s basketball games. Also during the spring, Athletic Band members have the chance to go on tournament trips for the various sports. The groups chosen for these trips are based on Athletic Band seniority and availability. The spring Athletic Band also performs at the annual Spring Game, where members perform a drill show at halftime. Rehearsals run every Monday and Wednesday from 5:20-7:00 p.m.* in the Steinbrenner Band Center. (Times are subject to change)

The uniform for the fall and spring semester Athletic Bands consists of a polo shirt with black pants, shoes and socks. A polo shirt is provided to all members and can be picked up from second-floor uniform office. Band members are responsible for purchasing pants, shoes and socks on their own. The spring men's basketball band uniform also includes a long-sleeve pullover that must be returned at the end of the semester. Windbreakers are also provided for the Spring Game and the Cedar Point performance that must be returned to the end of the semester. Students are responsible for damaged or lost pullovers and windbreakers.

Students have the option of using their own instrument or checking one out from the second-floor instrument office. All brass and percussion instruments are available to sign out for the entire semester, but unfortunately the office does not provide any woodwind instruments or accessories. Students are responsible for lost or damaged instruments.