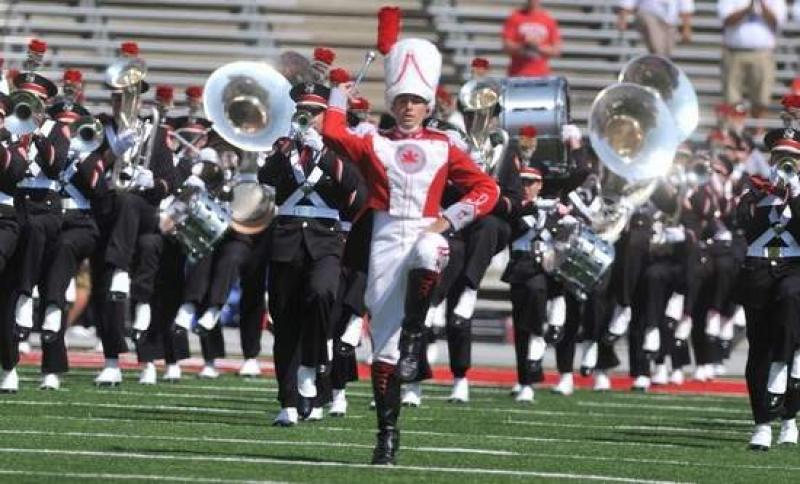 Josh Halter, from Hebron, Ohio, and was first exposed to The Ohio State University Marching Band while attending a Skull Session with his High School’s trombone section. “As soon as then-Drum Major Adam Prescott started performing I knew it was something that I wanted to try. The drum major combined precision, athleticism, and personality into a performance that had everyone’s attention.”
Halter was another one of the first members of the Drum Major Training Program. “I started training days after Ohio State won the national title in January of 2003 and immediately began receiving instruction from Adam Prescott (OSUMB Drum Major, 2001-02) through the Drum Major Training Program and developed a natural ability for the craft.” stated Halter.

Halter’s high school in Hebron never had a drum major position, but there was a history of great OSU drum majors from Licking County including Dwight Hudson (1977-79) and Bruce Hart (1982-83). “I had big shoes to fill” said Halter. “It was exciting for me to hear about Dwight and Bruce and eventually to meet them both as I went on to Ohio State.”

From the very beginning of Halter’s drum major career alumni drum majors were very influential on teaching him the attributes of becoming a successful drum major. Greg Eyer (OSUMB Drum Major, 1985-86) worked with Halter from day one and all the way through his last year as drum major at Ohio State. Shelley Graf (OSUMB Drum Major, 1981) and Oliver McGee (OSUMB Drum Major, 1980) also helped motivate and train Halter consistently throughout his college career. “Above all else, I remember my parents driving me to and from practice two nights a week, rarely missing, to Columbus for lessons, and for that I am forever grateful.”

“My best memory came in my final game at the Rose Bowl. I will never forget the excitement and adrenaline that the parade provided, although it was significantly the longest parade I had ever done, I enjoyed every moment. The game was also a tremendous experience. Although much of the media favored Oregon to win, Buckeye Nation showed up and cheered our team onto victory.”
The drum major spot comes with high expectations, which for some, produces a lot of stress and tension. With each game that follows the drum major begins to gain confidence and composure.

“Overcoming such trials is not a difficult task, but through many hours of practice and through the encouragement of family, friends, alumni and fans I succeeded.” said Halter.