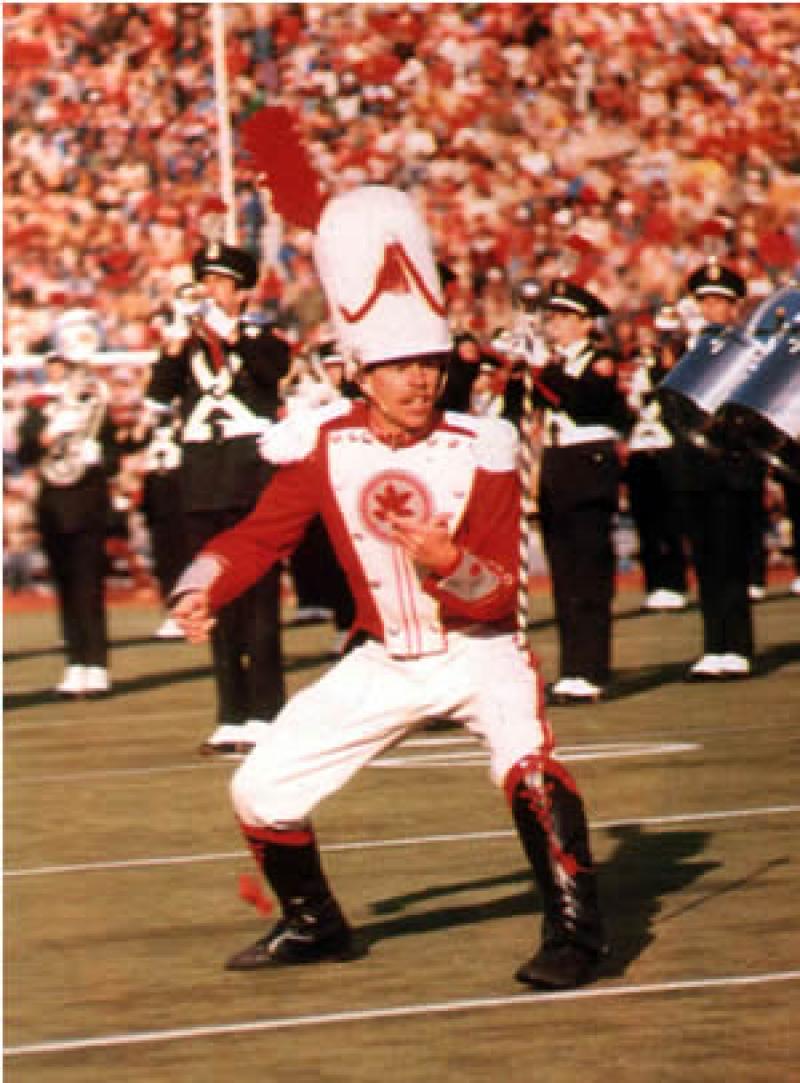 Bruce Hart followed Dwight Hudson as drum major at Licking Heights High School. "One day during Dwight's senior year he approached me and asked my jacket size," Hart said. "I told him and he said 'Great, we can have it altered. You're going to be drum major next year. You can wear my jacket.' I hadn't given drum major a thought, let alone twirling. I knew I would never be able to duplicate his twirling feats, so I would have to develop my own distinct personality as a field commander. I wanted to be a multi-dimensional performer and not just concentrate on one aspect of the job."

When Hart arrived on campus, he had plenty of time to learn the Ohio State traditions and develop his skills. He served on the drum major squad his first two seasons and was selected assistant for his junior year. During this time. Hart spent many long hours in the field house working out with Oliver McGee and Dee Felz, who served as a mentor for both Dwight and Oliver. "After a year as assistant I didn't think I would ever be drum major. The competition was fierce! I would have to beat out two former national finalists, a flamboyant showman, and the incumbent drum major, a nearly impossible task," recalled Hart. "I focused on the tryout music. I wanted to be a visual representation of sound ... to bring out the highs and lows, every accent and crescendo." It worked. After three grueling run-offs, Hart was selected drum major where he would serve for two seasons.

"During those two seasons I always tried to focus on the show," Hart said,” If we were doing a classical show, I would look for more regal moves, and if we were doing a country music or broadway show, I would attempt to perform in character. On occasion Dr. Droste would veto my interpretation, so I started using one routine during band practice and then would head off to the field house and rehearse the real routine Finally Paul said 'Bruce, I never see the same routine on Saturday that I see during the week, but some how you always pull it off.' I think that was Paul's way of saying that he liked what I was doing."

Hart's two seasons held many great memories, but one honor will always stand out. "The greatest thing about being drum major was knowing that you represented the best band in America and a great tradition. That feeling was magnified (when I escorted Woody Hayes out for the dotting of the 'i.' grabbed his hand, and as the crowd roared, I said 'Sir, this is a great honor for me.' Woody could only nod his head as a tear rolled down his cheek."

Since graduating, Bruce has designed halftime shows for the Blue Bonnet and Hall of Fame bowls. The Maui Classic, the opening ceremonies for the U.S. Olympic Festival, and Work Expo 88 in Brisbane, Australia.