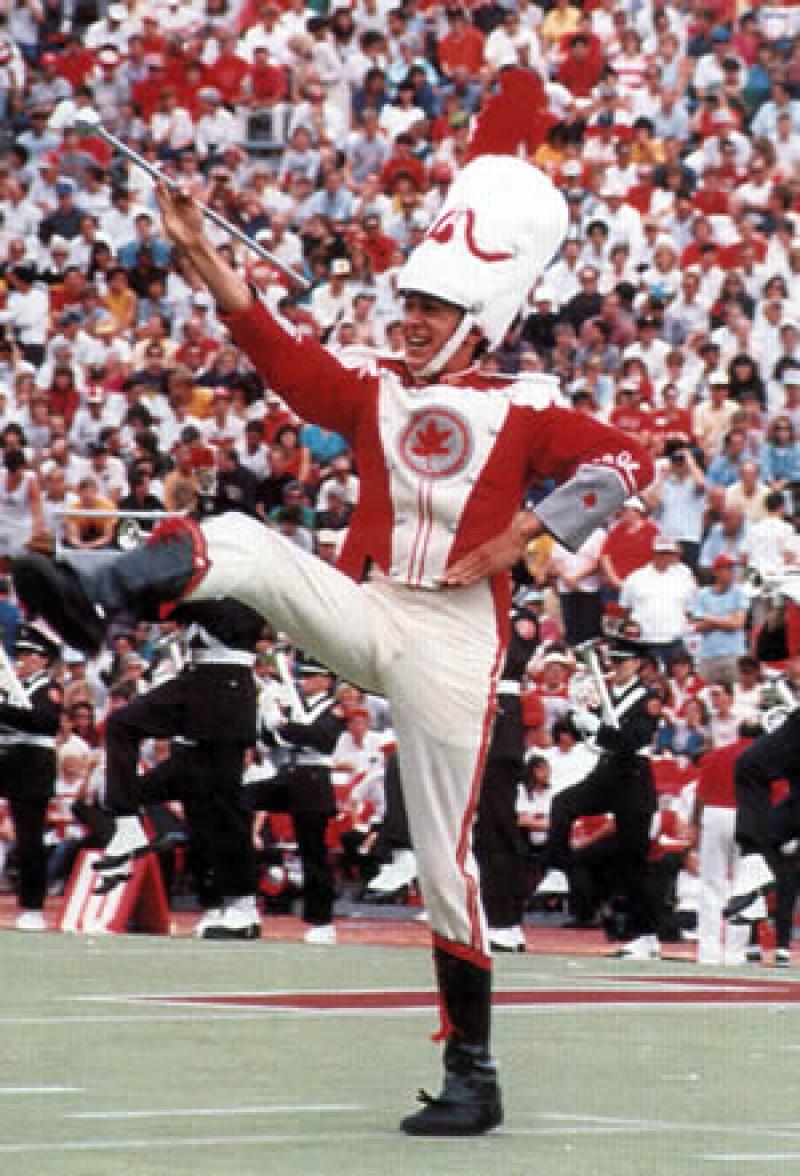 When Greg Eyer decided to attend OSU, like most students, he had a goal — he wanted to become the drum major for the marching band. With incredible perseverance and talent, he did it.

Eyer was exposed to twirling at an early age. His mother, Marilyn Strang, was a baton twirling instructor and contest judge. With her encouragement, Greg began twirling at the age of nine and playing drums at ten.

When he was 15, Eyer studied twirling with Harry Brown of Wadsworth, Ohio. Greg improved rapidly and soon competed on a national twirling circuit, enjoying much success. Under Brown's guidance, Eyer won three state twirling championships, and was ranked third in the country in 1981.

While attending Wynford High School in Bucyrus, Ohio, Eyer was in marching band and held the drum major position for four years. From 1979-1981, Greg was also the drum major and feature twirler for the All Ohio State Fair Band.

During his senior year of high school, Eyer began receiving numerous scholarship offers from colleges across the country. One event in his life, however, convinced him he wanted to be a Buckeye.

When he was 13, Eyer attended OSUMB's annual Mershon Concert. This was the first he saw the band, and the first he met head drum major Dwight Hudson. Hudson invited Eyer backstage to watch him prepare for his performance. "I remember Dwight being so friendly, treating me as if I had been a friend for life," Eyer recalled. "He was a celebrity, and he made me feel important. I knew from that day on that my goal was to lead The Best Damn Band In The Land onto the field."

Eyer first tried out for drum major in 1982, his freshman year. He became a member of D-row and soon found out he would have to learn a different twirling style if he wanted to make it. "OSU has its own tradition and style that a drum major must integrate into his own style," Eyer explained.

Greg tried out again in 1983, and once more held a spot in D row. Frustration turned to dedication as Eyer spent the rest of the season practicing his technique. After not making either of the two top positions he opted to sit out the 1984 season to work on his own.

While drum major, Eyer had the opportunity to perform for crowds at the Citrus Bowl, Cotton Bowl, Browns-Broncos play off game, and the Kickoff Classic. At the Kickoff Classic, Eye received a standing ovation for his flawless and energetic performance.

Though the Kickoff Classic holds a special meaning for Eyer, his most memorable game was in 1985 as Ohio State took on Iowa. Ohio State beat the number one-ranked Hawkeyes and Eyer had the task of leading a post game script while fans poured onto the field. "It was difficult," Eyer said, "but it was definitely a rush."

Eyer is still very involved in twirling, and can be seen performing as drum major with the OSU Alumni Band. In his spare time, Eyer also takes pride in teaching hopeful OSUMB drum majors the style they need to succeed.