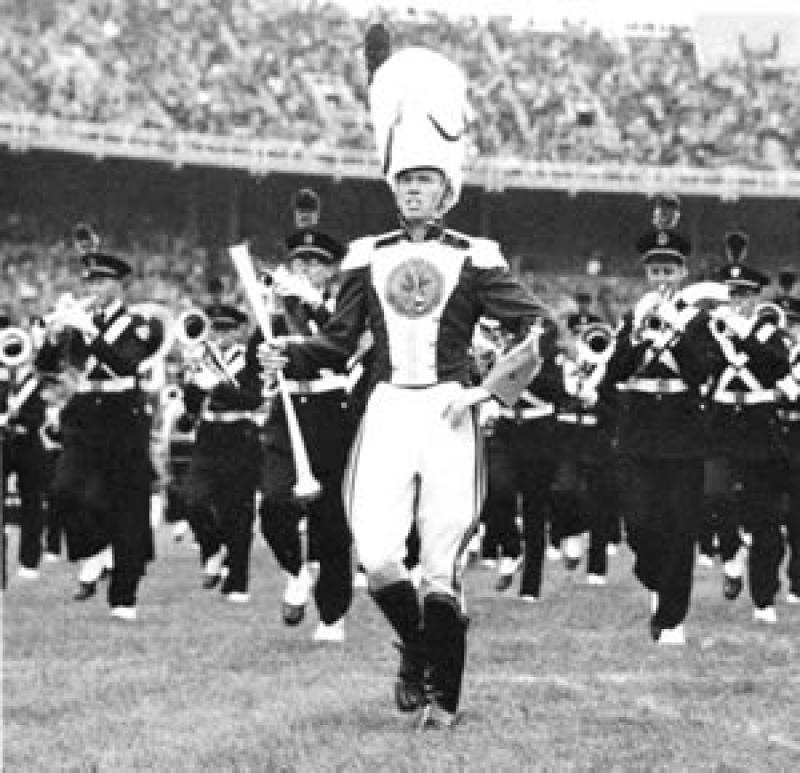 Every drum major would like to be remembered for some significant contribution that might add to the OSUMB tradition. James E. Bodman, (OSUMB drum major 1952-53), today a Hollywood actor, left with the band some of his artistic talent in the uniform he wore. When he was drum major, the fine arts student designed his own uniform for an art project and had it made by Fehheimer, Inc., Cincinnati, Ohio.

Many influences have played a part in determining the style of uniform worn by the OSUMB. The first drum major's uniforms in the 1920's were influenced by other marching band units across the country and Europe. Ohio State adhered to the universal patterns of the day with large Busby hats, long frock coats, riding pants, Wellington boots and heavy braid. They were not made to be functional but exciting to look at. The long tail coats were fashionable attire and worn by many drum majors in the Western Conference.

Ed Maundrell, drum major in 1941, designed the first version of the short tail coat and had it made by the Lilly Ames Company, Columbus, where all previous uniforms had been made. Maundrell's uniform retained a touch of the "Moose Antler" pattern, which was still popular throughout the country. In the late '40's, the style for the drum major's uniform regressed to the pre-war styles and had-me-downs from the early '40's.

When Bodman designed his uniform, he took a look at the past and eliminated many of the frills. He incorporated the new Buckeye monogram, designed in the '50's as a shoulder patch for the bandsmen. Bodman's uniform must have met with approval, for it has outlasted every other style of uniform at OSU and has been worn by 16 different drum majors since its conception.

Garments worn by the drum majors at OSU have been cumbersome and have inhibited movements since they were introduced in the 1920's. The first part to be eliminated was the looping braid over the uniform and the baton. In the '30's heavy material and tight fitting jackets that impaired movements were discontinued. Long tail coats that tangled up in hands and baton were redesigned in the '40's.

Unfortunately, the quality of workmanship in the uniform has deteriorated over the years. In general, most of the suits have fallen apart before the season has ended. During the '50's, '60's, and '70's epaulets continued to fall off, buttons kept popping, and seams ripped. Historically, change and adaptation of the uniform were brought on by necessity.