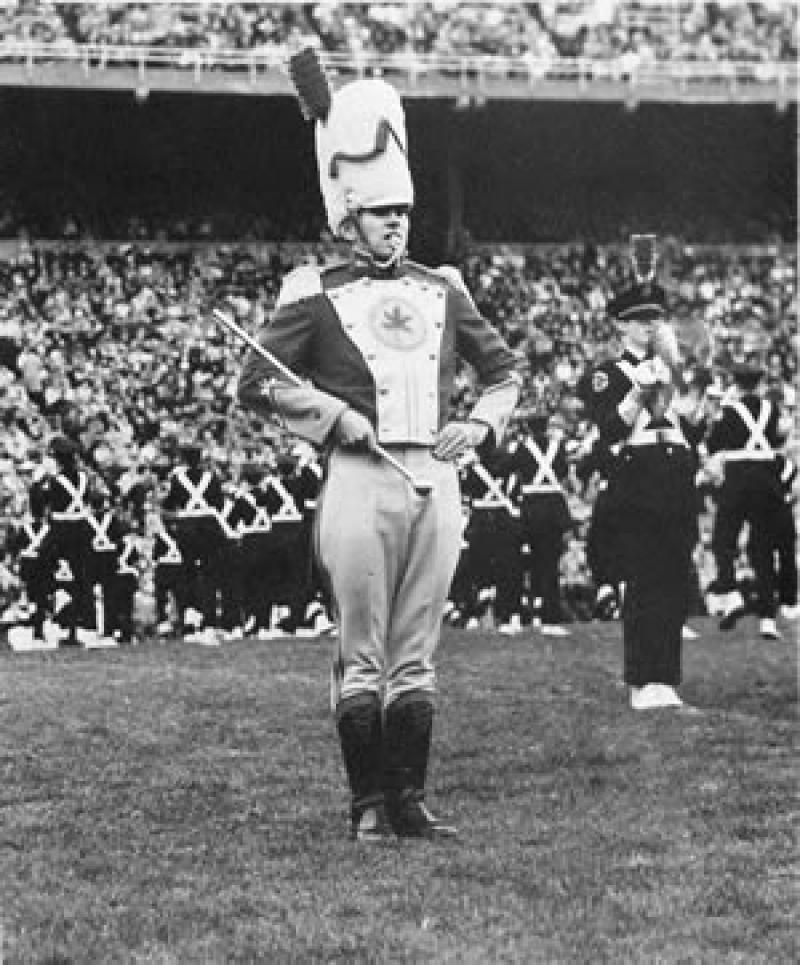 Jack Swinehart's chance to be drum major came unexpectedly and before he was quite ready. He was assistant drum major in 1967, but at the homecoming game he became the drum major. Kirby Wyatt, the head drum major, suddenly felt ill during the pregame show and decided about halfway through the second quarter that he could not do the halftime show.

As Swinehart says, "I hurried and got dressed but I did not feel adequately prepared. I had practiced Script Ohio several times, but had never done it alone with the band. As Director Spohn and Wyatt went over the charts with me at the last moment, I was in a complete daze. Surprisingly, the show went fairly well, with all the guys shouting encouragement to me and helping me by telling me where I should be. Then came the Script. The feeling was absolutely incredible. Things went very well through the '0' and the 'H' but when I got to the bottom of the 'H' I lost all track of where we were. I somehow thought that I had just completed the 'I' and proceeded to march into the top of the '0'. Luckily, the guy behind me did just what he was supposed to do and went to the top of the 'I', but I felt absolutely ridiculous when I turned around five yards away at what I thought should have been the top of the '0', only to find that I was all alone. It was a good thing that no one followed me. Who knows, it could have been the first Script Ohoi in history.”

"As a drum major those moments are gone, you stand there as one, instead of one of 144. You know the band is with you, but the waiting is different because you know that when you go out and lead them down the field, for a moment, you are the focus of THE BEST DAMN BAND IN THE LAND. The need to be the best, to be as good as you know they are, is enough to keep you from eating breakfast on Saturday mornings.”

Wyatt's four years in S-Row made him painfully aware of whom he was representing out there. "A baton coming down from 50 feet on a cold day is no more painful or difficult to handle than a mouth piece as you are trying to play and find a yardline under an inch of water on a cold and rainy day," he said. "Being drum major taught me that when you're out front alone, there's nothing like knowing you have the best right behind you."

Swinehart did not get involved in twirling the baton or interested in being a drum major until his senior year in high school. His big thrill came when he was drum major at the college All-Star football game in Chicago, before 70,000 people. There, he decided he wanted to be a college drum major and chose OSU because his predecessor in high school did and had become an assistant drum major. Swinehart resolved to do better than that. The sudden death of his mother furthered his resolve, but achievement would prove to be very difficult.

In his freshman year Swinehart cracked his elbow. Then, in the winter, he tore the ligaments and tendons in his ankle. Due to poor treatment, it became badly infected and he was on crutches until one week before drum major tryouts in the spring quarter. Even though he was noticeably limping, he tried out. Undaunted that he had not made either position, he resolved to try again. The next year he made assistant drum major.

The homecoming game seemed to be jinxed for Swinehart. In 1968 while he was doing the halftime show, he threw a "C-decker" that came down with such force that it broke his little finger. Despite excruciating pain, he finished the halftime and postgame shows. The next day one doctor put a massive splint on him that completely immobilized the entire finger, hand, wrist, and forearm, and said he was through for the season. Instead of giving up, he asked the team doctor what he could do to make it possible for him to keep his position. Dr. Murphy made a new splint, shaping it so that it would fit just right. This splint covered only the little finger, leaving it free to move from the knuckle while keeping the rest of the finger immobile. Swinehart experienced some pain while twirling, but the splint worked and he was able to finish the season, which included a trip to the Rose Bowl.

Swinehart is presently a Baptist minister and has written about his personal emotional turmoil that was associated with his years as drum major. He thinks it is very likely that many drum majors suffer from great emotional instability also. "Because of the position, the drum major is thrust into the front of everything and naturally assumes some degree of leadership. This can go to his head. He begins to enjoy the attention of band members, the applause of the crowd and the attention of women. Many times he is not ready or able to handle it. The position is unique. No one else in the band or the University shares his feelings or his momentary glory. Because of this, he feels a strange mixture of power, prestige, and stardom, while at the same time feeling extremely insecure and alone. When the season, or more dramatically, his career is over, the drum major experiences a crash. The uniform is hung up, the baton put away, the hat in storage, the crowd is gone and no one recognizes him when he is not dressed in red. Now the future does not hold the glory, the attention of the past, and he realizes that his whole life must be arranged, reprogrammed, with new goals and directions. Many cannot handle it. For me, it was a prolonged time of trying to find reality and purpose in life. I questioned everything. After much agony in mind, I found my purpose for living, my goal, in the person of Jesus Christ. Life has never been the same since."