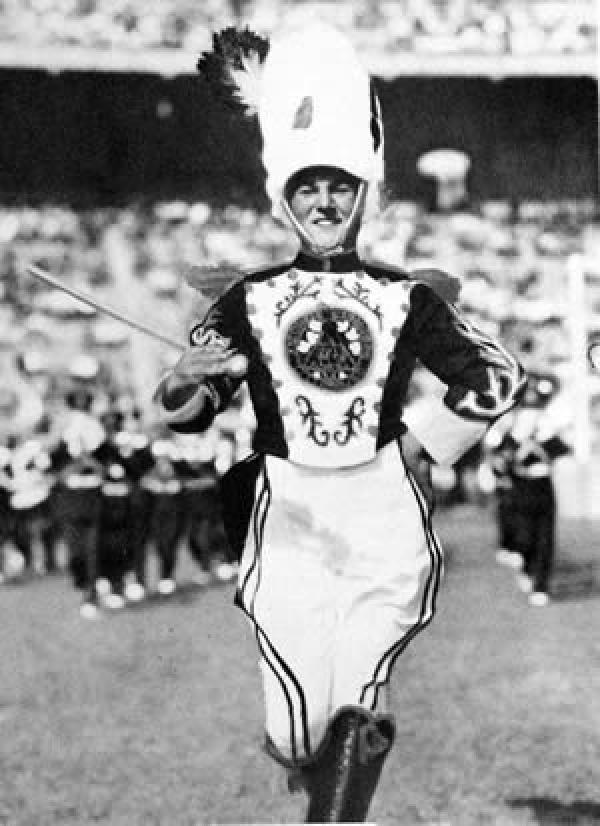 In 1941 the high strut was required in tryouts. Ed Maundrell and his assistant, Jerry Johnston, made it look easy.

The evolution of high strut began in 1936 when the pregame music, "Buckeye Battle Cry", increased from 132 to 166 beats a minutes. Leas ('36) introduced the high step, which later evolved, into the high strut when the tempo increased to 180 beats in 1939. Dick Jones that year extended the leg movement outward with high knee and pointed toe. This enabled him to smooth his strut and not look bouncy. Maundrell simply added the arched back. Jerry Johnston (OSUMB drum major 1942) polished these movements that he had learned from Jones and Maundrell. He added that accented hip and shoulder movements with head extended back and down as far as possible. An old philosophy of show business, "Make the hard things look easy and the easy things look hard,” applied equally well to the artistry of the drum major.

Maundrell and Johnston both looked smart in their tight hot suits and large cumbersome hats. Both had the physical agility to march and bend backwards at a 45-degree angle and move with ease at a tempo of 180 beats a minute, keeping their heads level, while elevating their feet 36 inches off the ground. Executing in tempo a coordinated four beat thrust with one arm, they would appear to float effortlessly in tune with the music. This procedure required self-discipline, tremendous stamina and untold hours of practice.

Not all drum majors agreed to the change to the high strut. Gus Hall ('23) in his later years wrote, "The 120 pace of the former bands had a military and unhurried look and was easier on musicians. The present 160 or greater half-step seems juvenile, not dignified, and really doesn't prove anything. It also has forced present drum majors to perform in a hurried, desperate, strut that is exhaustive, undignified, and leans toward clownishness."