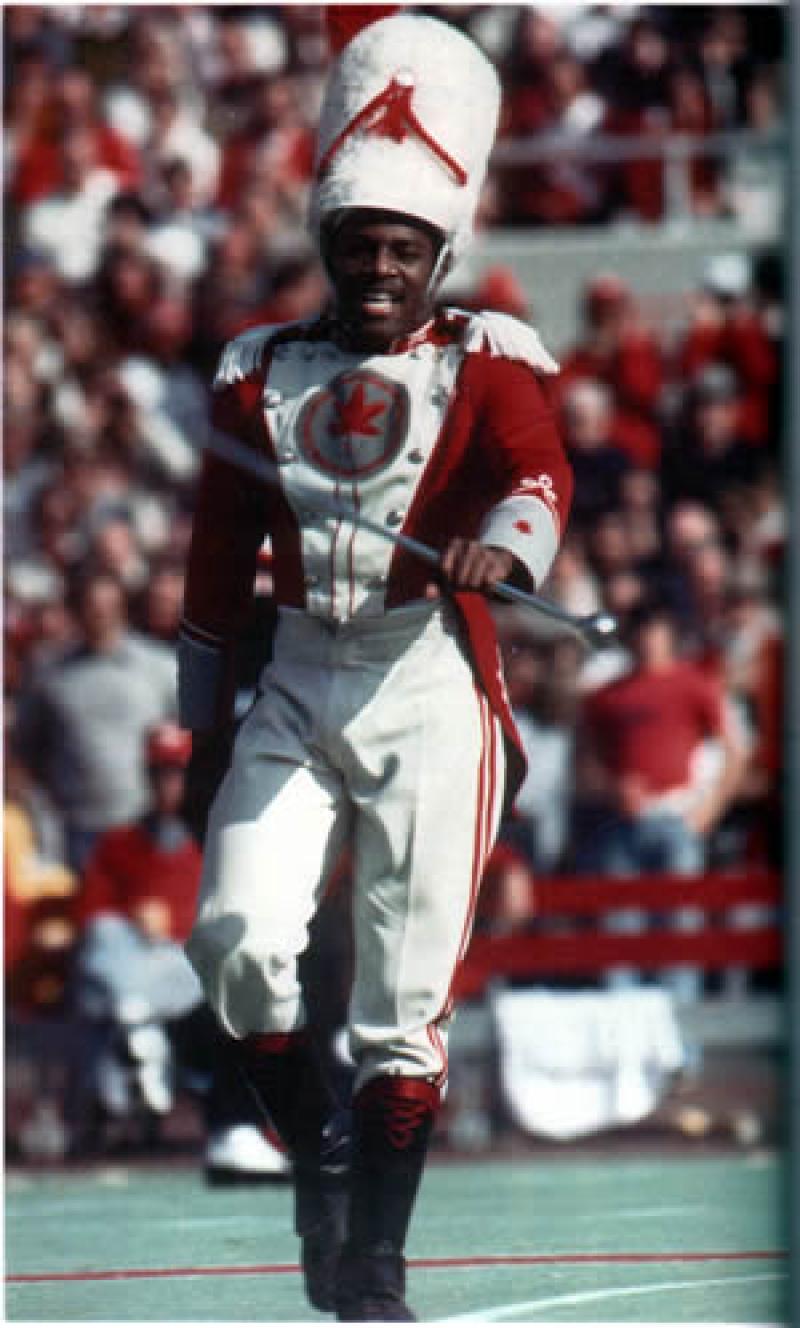 Dwight Hudson thrilled and amazed his fans for three years, the longest term as drum major since "Tubby" Essington (OSUMB 1920-22). His fantastic performances on the field looked effortless to the casual observer, but there was much more to his success story; work, experience and desire.

Training is perhaps the most influential prerequisite in the making of a good drum major. Some "up front" men have natural abilities and can demonstrate principles of good showmanship in a short period of time. Most drum majors at Ohio State, however, seldom reach their peak of perfection until their senior year, simply because they started too late in their training. Training involves not only the development of twirling and marching techniques, but also exposure to the public and the pressures of a contest or a live audience. The performer is tested in much the same way as a soldier in combat, and awards are given for greatness "under fire."

When Hudson came to Ohio State, he came prepared to be the drum major. He had started as early as the fifth grade to learn a musical instrument (drums) and began twirling the baton in the sixth grade. He taught himself the basic baton movements by observing other performers. He later took lessons on the baritone horn and drum; developing into a fine musician by the time he reached high school. He was a member of the band and drum major at Licking Heights High School.

Hudson's first formal baton lessons came from Mrs. Diane Cain, a former high school majorette. He performed at every possible occasion and attended band camps in and out of town. Enrolling in a gymnastic course in high school, he developed strength and stamina, which later enabled him to propel himself into graceful leaps.

In 1975, when he was a junior in high school, he was introduced to a prominent baton instructor, Mrs. Dee Felz of Columbus, Ohio, a former head majorette from Northwestern University (1956). Mrs. Felz gave Hudson the necessary technical training and the confidence to make him a champion. He was well rehearsed and gave numerous performances, competing in events which enriched his experience. In his last years high school Hudson was a well-known star, a veteran of many band contests, parades and shows around central Ohio.

Additional help and encouragement from drum majors Ohio State did not come until his senior year in high school. The OSU band was aware of his talents, but so were other universities; Michigan, Northwestern, University of Southern California, and many Ohio colleges offered scholarships plus “extras" if he would enroll with them. Ohio State offered him nothing . . . nothing but the finest band with the best reputation for drum majors in the country.

Hudson's father, an employee at The Ohio State University, had for many years taken him to OSUMB rehearsals. Here he had acquired aspirations to lead the band. His personal letter written to the band director when he was in the fifth grade clearly states his intentions. Perhaps the reason that Hudson came to Ohio State was that he wanted to honor his dying mother's wish. She had hoped that some day he might lead the band at Ohio State.

The accomplishments of Hudson are many. For three years he served the band with distinction. He was voted the Most Inspirational Bandsman of the OSUMB in 1978. His showmanship and baton tricks surpassed description. If one were to single out a small fraction of his greatness, it would have been his timing. He had the ability to think ahead in music as much as two measures, throw the baton high in the air, execute one of his gymnastic movements, and recover the stick on the last musical note, winding up with a fantastic gesture and facial expression that told it all.

Because of his extreme popularity, Dr. Droste allowed Hudson to return for a third and final year in 1979, breaking the unwritten two-year rule. At the same time, Droste created the drum major squad, a group of prospective drum majors who trained during fall quarter.

Hudson received many standing ovations during his tenure as drum major. However, none surpassed the tremendous ovation he received following his farewell performance in 1979.