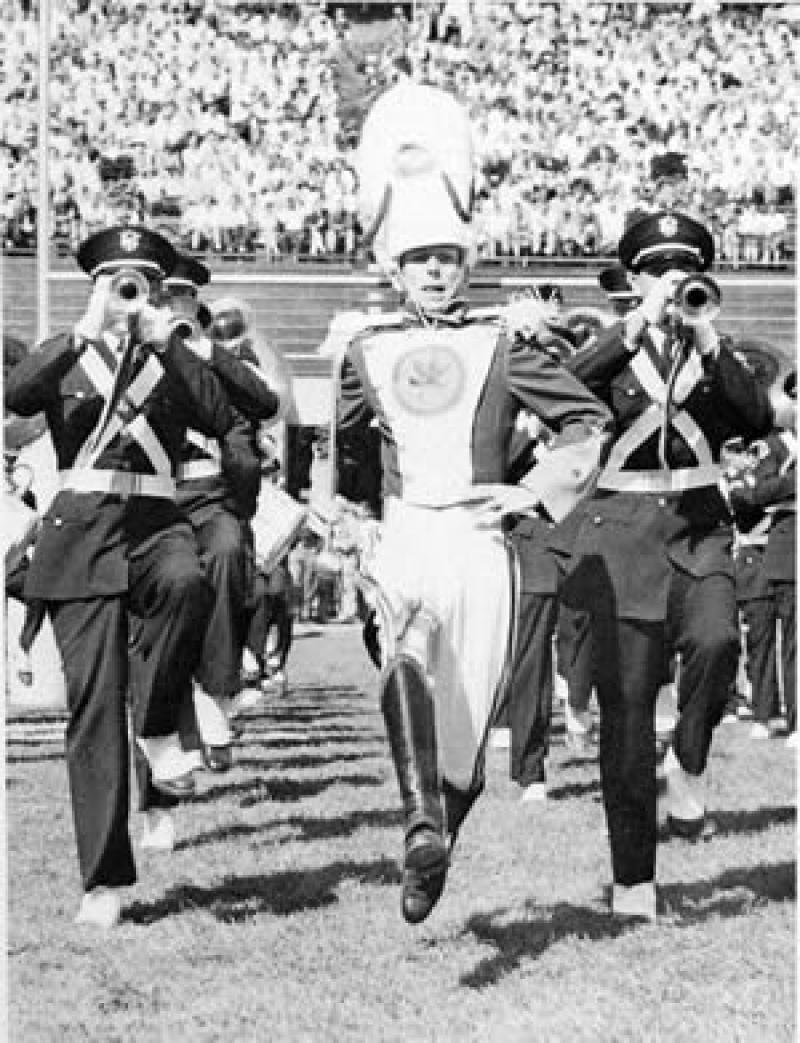 The mandatory draft of 18-year-olds during the Korean conflict created similar conditions to those of World War II, causing a shortage of candidates available to try out for the leadership of the band. Imposed limitations were placed on students as to how long they could stay in school. Such was the case of George E.W. Souder, a graduate of Bexley High School, Columbus. He joined the Ohio National Guard and enrolled at OSU, only to be called to active service with the 37th Infantry Division. He came back after two years of service and picked up the baton.

Souder shortly became acquainted with the Drum Major James Bodman (OSUMB drum major 1952-53), who in turn enticed him to tryout a couple of weeks before spring contest. He figured he couldn't make the line up, because he had been away and was out of practice, plus he had never been a drum major before. Contrary to his estimation, Souder outperformed the other five candidates to win.

The tradition for the outgoing drum major was to come back and share the experience with the new drum major on the opening ramp. Souder (OSUMB 1954-55)has related his experiences that summer of 1954."I had been a student of Kesling (OSUMB 1947-48) in my high school days and knew the fine points of the baton, but it was my first director, Jack Evans, who worked with me all that summer and styled my ramp entrance. He had been a drum major himself and knew how to handle the baton. He worked my tail off in those closing weeks before the first game. MY PT training in the Army was no match for the exercise I did in that stadium. If you were going to make it at Ohio State in those days, the ramp came first. Jack Evans kept me straight and dignified — that is, no funny stuff went on the field. Those were great years. I held my head high with the greatest bunch of guys in two successful seasons — something you never forget."

Paul Droste, the current director of the OSU band, who marched, played and took his cues from Souder said, "When George put on his big hat and beautiful suit, it made his 115-pound frame look as big as anybody carrying the big stick (32-inch Leedy Ludwig). His voice commands were the loudest I had ever heard booming across the stadium. He could 'drive' you anywhere."

In the pre-game show Souder specialized in the high strut, straight, high and to the point with snap and precision. At the half, he had a keen sense of synchronizing band and the drum major role, which is to not overshadow the band by always being the center of attention. He was taught this way and it became his manner of showmanship. Incidentally, Souder is the only "old timer" who can still get into his uniform, which hangs on its cloak rack in the back room of his home.

Before the new Stadium Bandroom replaced rehearsal hall there was an important tradition for drum majors. Each drum major would place a large, framed portrait of himself in the hall. George Souder's five foot by five foot action picture was the first to be superimposed, in color, over a background of two stadiums, Ohio Stadium and the Rose Bowl. The tradition was replaced by the Drum Major Gallery in the new Stadium Bandroom.