The Steinbrenner Band Center, which opened in 2001, houses all components of The Ohio State University Marching and Athletic Bands. The facility includes a rehearsal hall, practice rooms, offices for directors and staff, and staffed instrument and uniform offices. 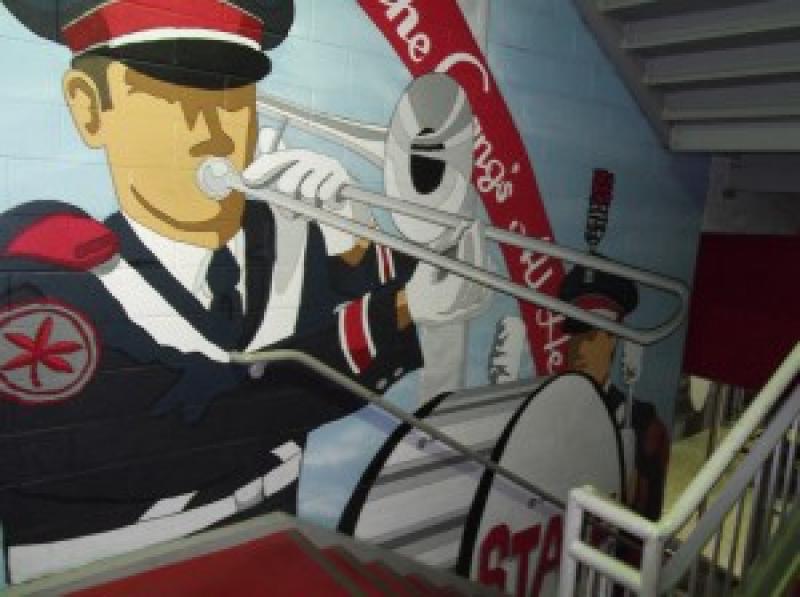 Named for the late Joan Zieg Steinbrenner, Ohio State alumna and wife of the late George M. Steinbrenner III, the Band Center first opened its doors for the 2001 season, welcoming TBDBITL to the newest and best band center in the country. Before this facility opened, the “old band room” was under the northeast corner of Ohio Stadium, having moved due to massive stadium reconstruction.

This facility is truly state-of-the-art and houses all components of the Marching and Athletic Bands. When first walking into the Band Center, one is greeted by murals spanning the two story staircase. One then reaches the foyer of the band center — a horseshoe-shaped room filled with display cases documenting the history of the band from its beginnings in 1878 with artifacts, articles and pictures. The ceiling is adorned with the words to the alma mater, Carmen Ohio. 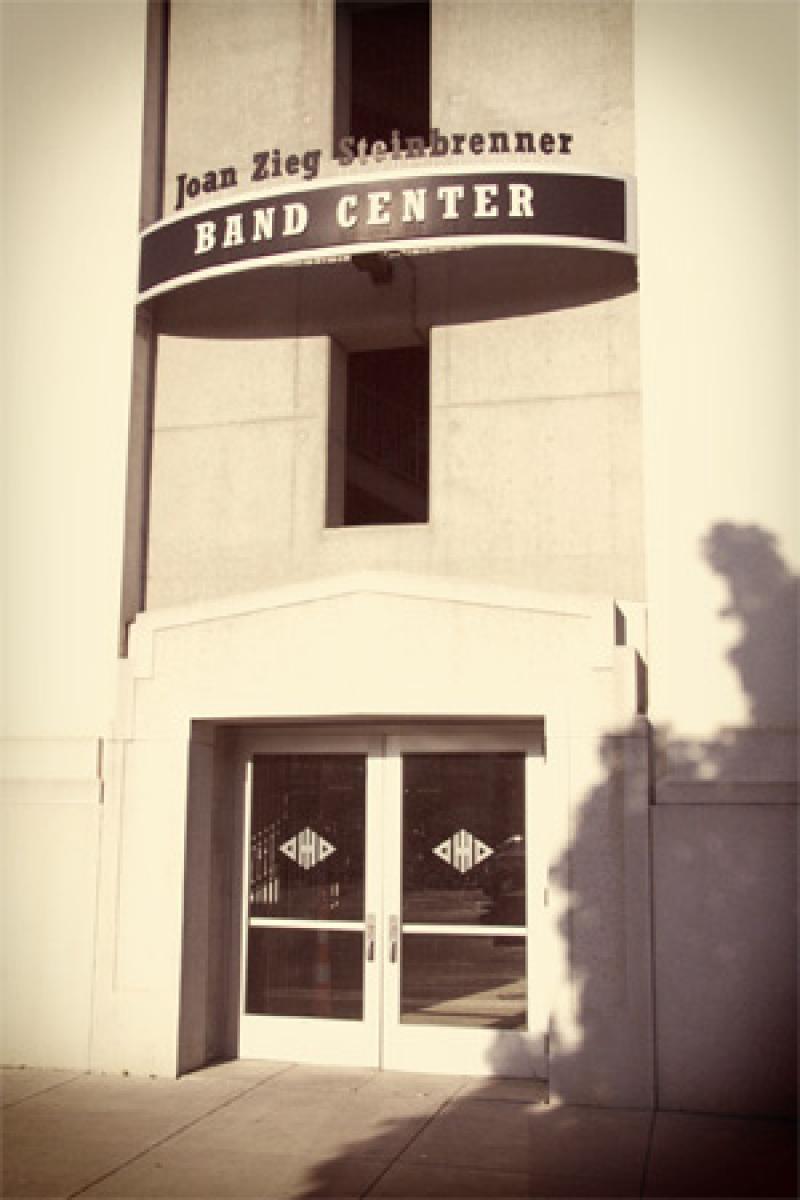 Also on this floor are practice rooms that house lockers for each section’s practice and game horns, as well as serving as sites for pre-rehearsal sectionals. Through generous donations and funding from our alumni and sponsor donations, each member of the OSUMB is provided with a “game” horn, as well as a “practice” horn – only on gameday does the complete set of game horns make its way from the lockers, providing a uniformed look that most college bands around the country are unable to match.

The feature of the first floor though, is the Rehearsal Hall. With room for more than 350 musicians and recording-level acoustics, the rehearsal hall is designed for work but shares aesthetic details that make it feel more like a home.

The “Diamond Ohio” cut into the room’s carpeting is placed at the base of the Director’s Podium – the virtual “command center” of the room. With access to aerial video recordings from the practice field, the touchpad computers allow directors to stop, pause, and highlight video segments to display to the whole band on the six televisions and two projectors. Adorning the back wall are portraits of each of the directors of the OSUMB, spanning back to the band’s inception by Gustav Bruder in 1878.

The second floor features rooms that oversee many of the behind-the-scenes actions of the OSUMB. An Alumni Lounge, Kappa Kappa Psi Office and Tau Beta Sigma Office help to service their respective organizations. The trainer’s office is located at the corner of the hallway, where our trainer assists band members with all immediate medical issues. The audio-visual office controls the microphones and recording components in the rehearsal hall and overlooks the rehearsal hall so that the director is always in visual contact with student staff members who operate the audio-video technology. From this room, recordings are taken to be used at the practice field, and gameday video is streamed to the rehearsal hall computers. Continuing further down the second floor, there are separate locker rooms for males and females – each member of the OSUMB having use of a locker for his/her uniform parts.

One of the busiest rooms in the band center is the uniform office. This office is staffed by students who control the inventory and sale of all components of each student’s uniform. In addition to the pieces of uniforms rented at no cost to OSUMB members (wool coat and pants, hat, raincoat, overcoat and crossbelts), the uniform office also sells replaceable items (plume, gloves, berets, and spats) and controls the stock and sales of these items. In addition to the rental and sale of items, the staff is also trained to repair and/or personally tailor each of the rented uniform parts.

Another busy room is the instrument office. The job for students manning the instrument office starts in the summer as they renting out instruments to students who will audition for the band before school starts. Keeping an inventory of the hundreds of school instruments as well as stocking replacement parts and mouthpieces requires much time devoted outside of the normal required business hours. In a separate room behind the instrument office is the instrument repair room where staff repairmen have the tools and parts to tear apart and fix every instrument in the band. Whether soldering a new brace on a bass trombone or rolling the dents out of the body of a sousaphone, these repairmen are trained to handle each instrument that the OSUMB stocks.