As with all positions in The Ohio State University Marching Band, becoming drum major takes an incredible amount of hard work and dedication. In order to earn the position of either head or assistant drum major, a student must have been a member of D-Row, the drum major training squad, for at least one season. D-Row tryouts take place during the same time as the marching band members in early August.

After one season on D-Row, students are able to try out for drum major during the spring. Drum major tryouts typically occur near the end of spring semester.

Through Winter Sessions and the Spring Clinic, there are opportunities for prospective D-Row candidates to train with former drum majors.

If you have any questions regarding the drum major position or training program, please email osumb@osu.edu or call (614) 292-2598. 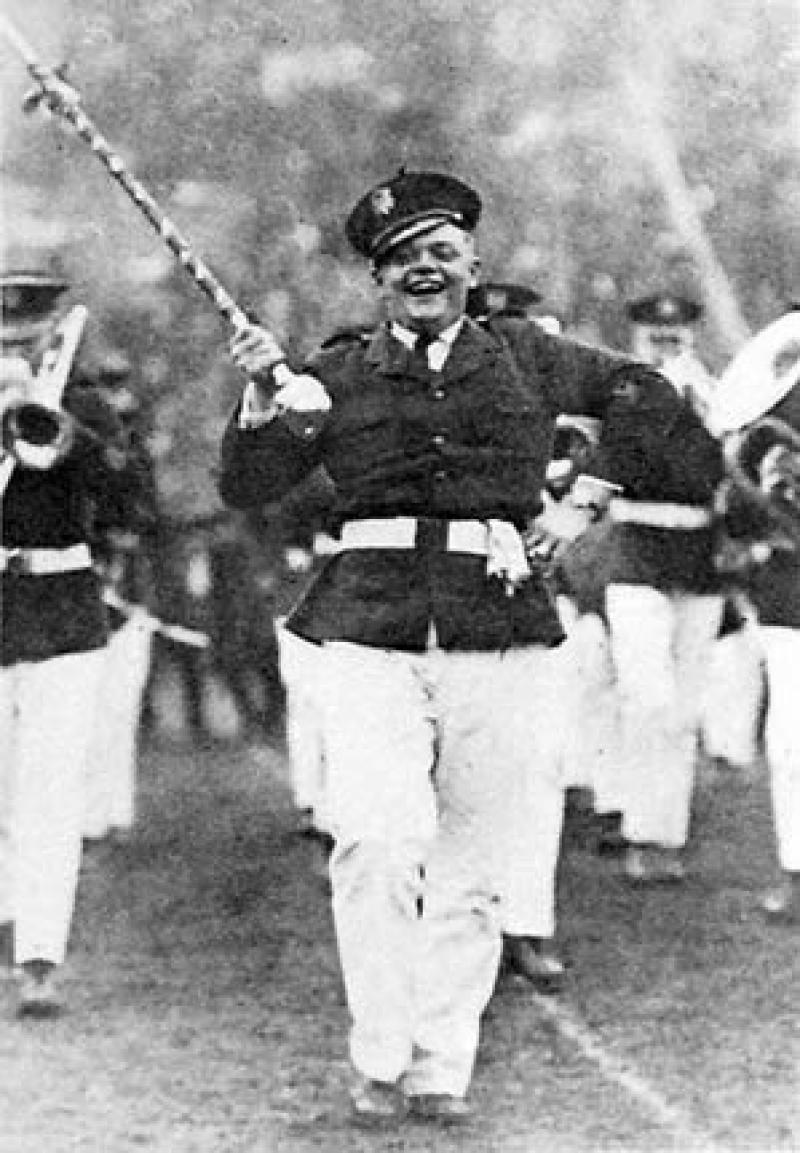 The drum major has been a familiar figure on the Ohio State campus since 1878. In 1920, Drum Major George ‘Tubby’ Essington, first introduced showmanship, color and personality to this leadership position at OSU. Prior to his time, the drum major’s position was based on a strict military discipline.

Perhaps the thrill and excitement of Ohio State’s winning football teams sparked by All-American Chic Harley in 1919 may have helped to break the somber look and regimentary characteristic of military drum majors. Essington’s showmanship, coupled with the smart execution of movement, established a tradition that has continued to the present day.

Over the past 100 years many traditions have been established that the Ohio State drum major is known for. These traditions include: the pregame backbend, leading Script Ohio, showmanship and mace-work using the Gray Baton and the pregame goal post toss.

A fun, but little known (and rarely seen) drum major tradition includes the “three knocks”. Five minutes before pregame, the drum major warms up for the physically demanding ramp entrance, while B-Row and C-Row cheer the drum major on. The warm-up includes a backbend and “three knocks” on a special plaque in the stadium, symbolizing the band is here and it’s time for the game to begin.

The drum major training squad, known to the band as D-Row, was formed in 1979 to assist in the proper training of potential drum majors, particularly due to the unique style and demands of the drum major position. Any student may audition for a position on D-Row during the same week the OSUMB is selected. Those selected for D-Row work as understudies to the drum major during the marching season to learn the intricacies of the position and the skills necessary to be an effective drum major. The number of candidates selected each year varies on the talent and abilities of the students auditioning. The typical number of D-Row members is usually between one to seven students.

An individual may be a member of D-Row for a maximum of two years. Once he or she has served for one marching band season, that person is then eligible to participate in drum major tryouts at any point during his or her tenure as a student at Ohio State. There is no limit to the number of times a person may try out for the position of drum major. However, drum majors are bound by a five-year membership limit, as are all other band members, with membership in D-Row included in this limit.

If you think you’d be interested in one day becoming an Ohio State drum major, or if you would like to learn more about joining D-Row contact the OSUMB staff.