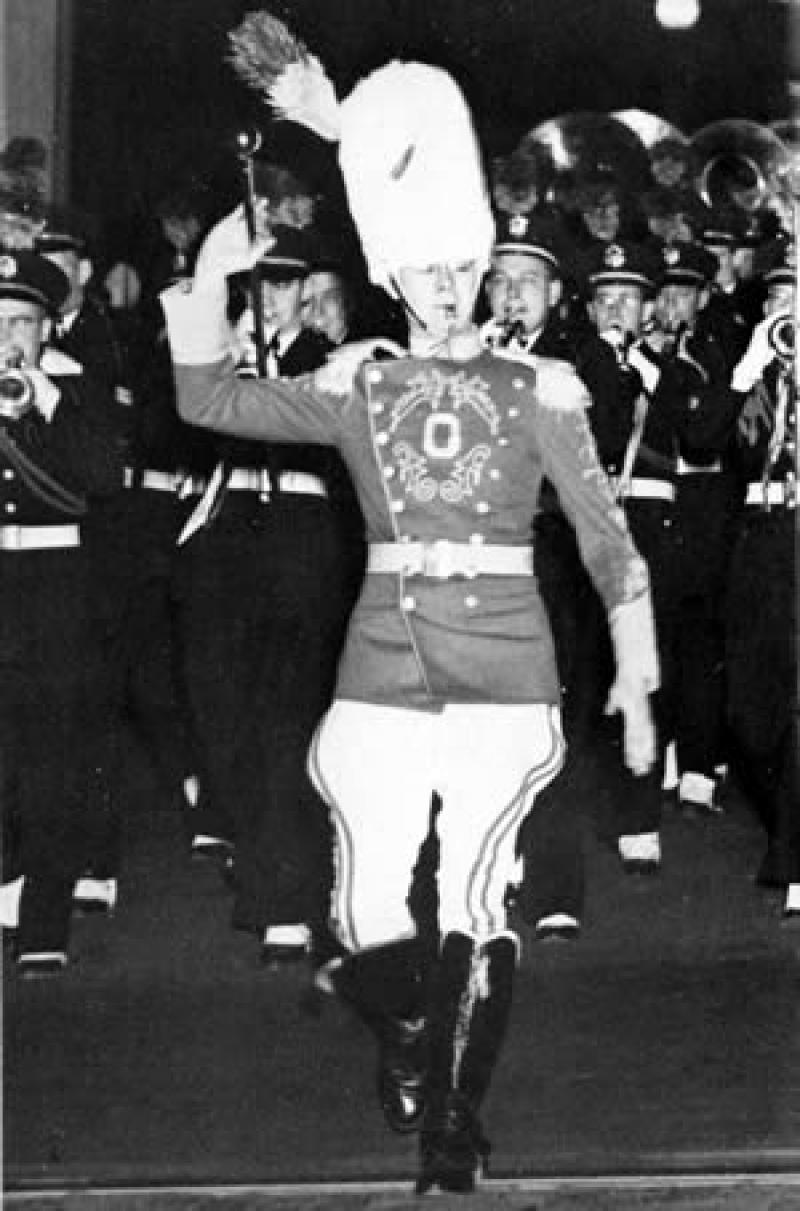 It has always been difficult for out-of-town students to break into the front ranks of the OSUMB. The drum major's post is equally as challenging, because the newcomer has to master a very difficult down-field routine in a stadium he probably has never seen. Generally it will take him from one to two years to master the technique expected at The Ohio State University.

Cyril Costoff (OSUMB drum major 1944) was different. With a two-week start, he pranced down the field like a veteran.

One of the most challenging formations for the drum major to perform is the Script Ohio. When it was first introduced in 1936 and on through the '40's, the drum major had the responsibilities of mentally measuring the distance, speed and step that would insure the completion of the music and formation together. Since the formation was so difficult, it was rarely used more than once at a home game and possibly at one away game each season. Orientation on the field was also difficult because there were no insert markers until 1946, and sometimes, because of bad weather, the sideline markers would be blown out of position. The chalk yard lines would become almost invisible after a hard rain. Knowing where to go was a problem because of the apparent mass confusion going on around the drum major.

Costoff recalled what happened in 1944 and described the problem: "Your vision is blocked on the 'cross-overs', the music sounds like hell, and it is difficult to keep in step because the music is out of 'sync' and everybody is yelling to keep the lines straight." Somehow, though, the band always managed to get through on the right note. The one appearance that was "iffy" was when the band performed at a Toledo high school on a snow-covered field, he said.

Costoff, who fell on the 60-yard line at the halftime show of the Michigan game, said candidly, "I finished my entrance and had strutted down the 50-yard sideline (west to east) where I was attempting a sharp turn when I fell flat on my face. I immediately got up and yelled to Bob Jones, who was on the sidelines by the band box. He gave me his white handkerchief. I wiped myself off and then proceeded with my routine as though nothing happened. My falling seemed to be the highlight of the season because it made all of the newspapers. Cleveland, Columbus, and Toledo all carried the story about the OSU drum major who had made an unexpected fall on the Michigan 50. To my credit, they did add that the field was muddy and soggy because it had rained all that week." Although Costoff fell on the 50-yard line, he never dropped his baton during a show.