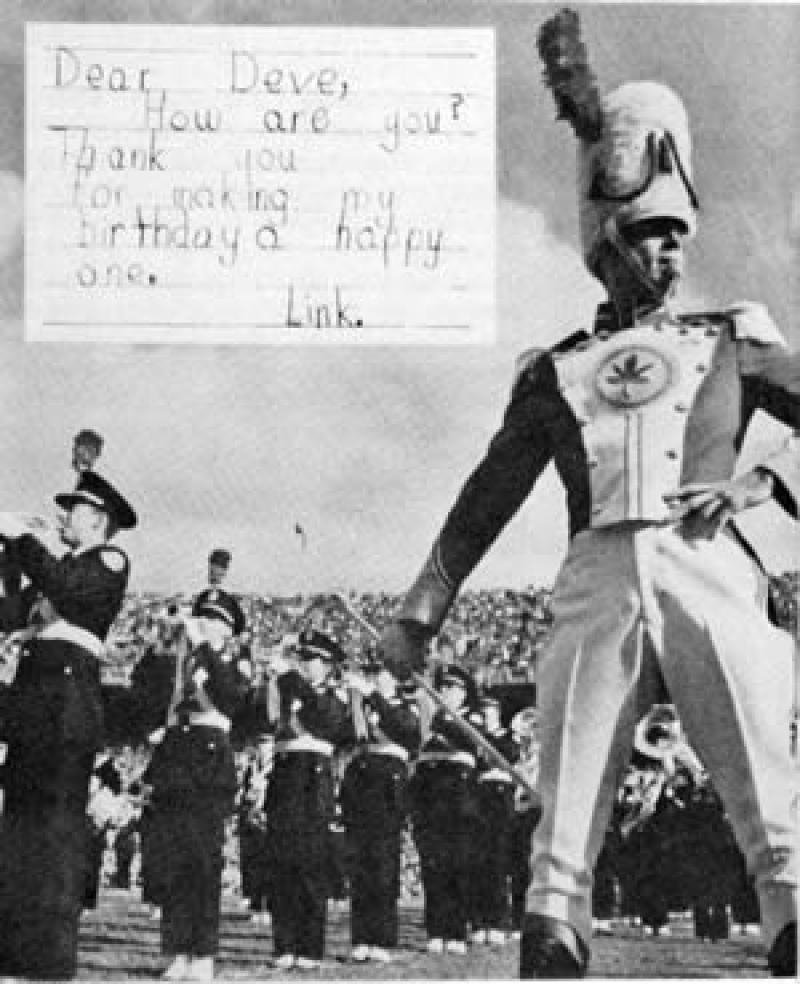 "Bob Belden Harper, better known as "Link" (a nickname applied because he was born on Lincoln's birthday), set his sights on the drum major's job when he was seven years old." said Ben Kline in an interview with the drum major published in the Columbus Dispatch, September 29, 1963.

Many parents who live in the Columbus area entertain their children during the football season by bringing them to the OSU stadium to watch the band rehearse. Dr. Robert A. Harper, formerly with the faculty at Ohio State University, brought his son, Bob, on just such an occasion in 1948. There had been a slight drizzle that afternoon and the boy was carrying an umbrella. When the band began marching and playing on the practice field. Harper began to mimic the drum major by marking time with the umbrella. Afterwards the drum major came over, took the umbrella and demonstrated several twirls and flips. A friendship ensued and the lad returned to practice with him the rest of the season.

Deve Kesling, drum major in 1947 and '48, tells his close association in Kline's Dispatch article. "He would practice on the ramp beside me. Everywhere I would perform, it seems he'd turn up. He admired me and I likewise admired him. He was a persistent little guy. Rain, snow, sun, Link always found a way to come and watch. It wasn't long till he had a baton."

As a special favor to the parents, Kesling made a surprise visit to his second grade class at University School and entertained them on Harper's eighth birthday. Through the years Harper kept his resolve to become an OSU drum major. When Harper, in his red coat and big white hat, led the OSUMB into Ohio Stadium in September 1963, it was the culmination of a 15-year old dream.