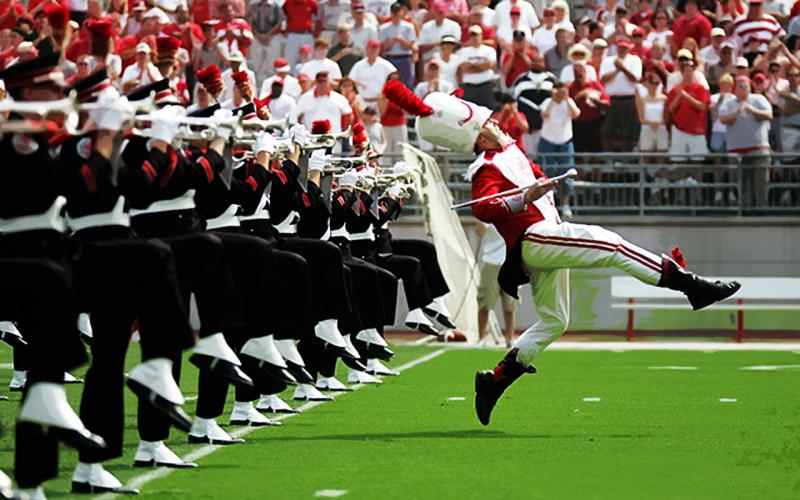 Eric Sommer was watching closely when his brother, Scott Sommer (OSUMB Drum Major, 1998), marched into Skull Session for his first football game as drum major. He knew then that he wanted to achieve the same goal and follow his brother to The Ohio State University.

After encouragement from family, friends and the Avon Lake High School band director, Gerald Servens, Sommer soon began to practice under the guidance of his brother and Tim Williams of Elyria, Ohio, a former OSUMB member. He won the position of Avon Lake’s drum major for his senior year.

The summer before Sommer’s freshman year at Ohio State, while practicing at a summer session, he injured his hand and had to make a trip to the hospital emergency room (the ride was courtesy of Jon Waters, a graduate assistant at the time) and had fourteen stitches in his right hand. Despite the setback, and with the help of his brother, Scott, and other alumni drum majors, he made D-Row that fall and in the spring was selected as the 2001 assistant drum major. As assistant drum major he developed skills he found invaluable but struggled with injuries and motivation.

The next two years at tryouts would not end in his favor. In 2004 knew he might get only one last shot to pursue his goal of striding down the ramp and leading the band down the field. He found his motivation to tryout one more time, not to prove anything to anyone else, but to do it just for himself. Looking back, Sommer believes his tryout was one of his greatest performances and he was selected as the 2004 drum major.

Sommer planned to enjoy the season as drum major, “This was my victory lap, I was graduating soon and I wanted to enjoy the last days of my college career. I didn't want to look back and regret not enjoying each moment.”

Sommer’s last performance as drum major was at the 2005 Inaugural Parade in Washington, D.C., where his future career as a pilot, and his college experience came full circle by performing at the Smithsonian National Air and Space Museum.

Today, Eric is active with the alumni band and performs often at parades and festivals during the summer. At the 2012 Alumni Reunion, he and his brother led the two Alumni Script Ohios on the east and west side of the stadium for the halftime show. They are the only siblings to ever be drum majors of the OSUMB. “That was a very meaningful moment for us both.” said Eric.