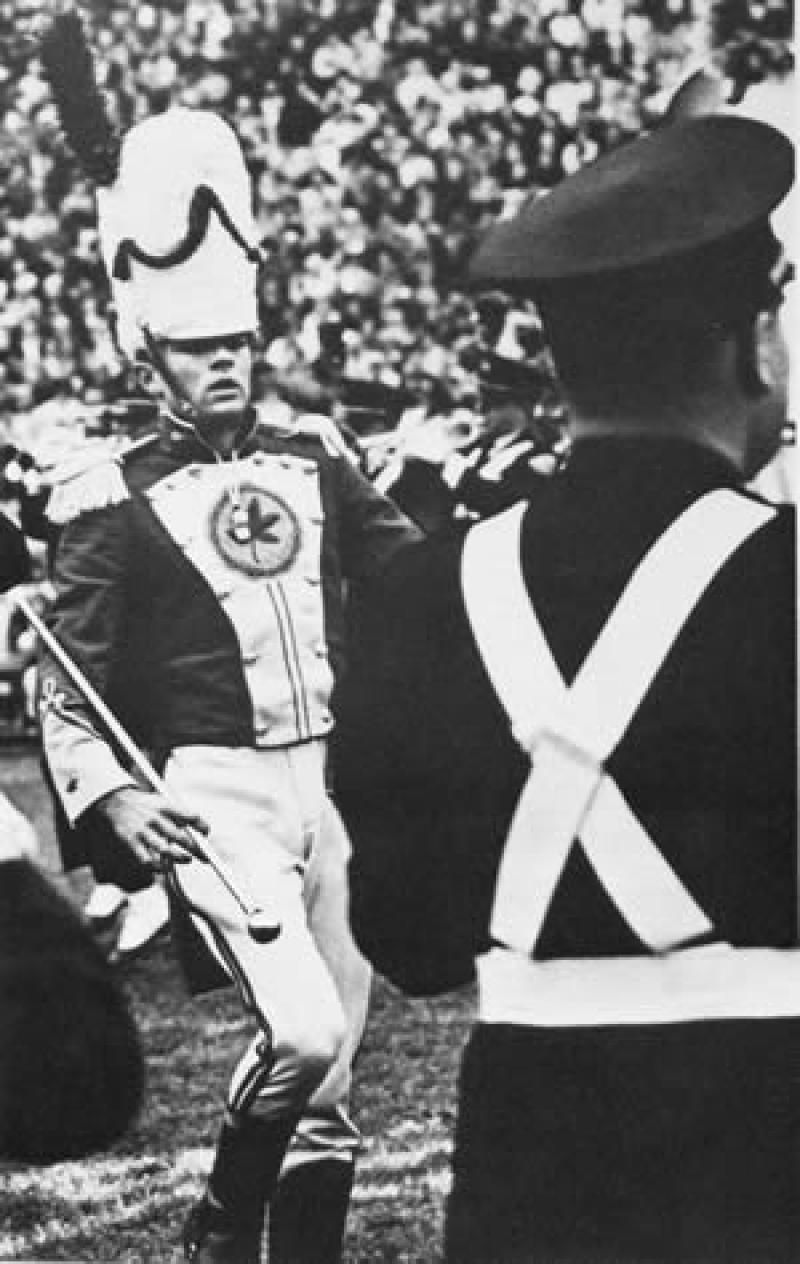 Mitch Breece, (OSUMB drum major 1965-66) an athletic six-footer, was a promising trackman at Sidney High School. The band director at Sidney selected him for the drum major position more for his physical agility than for his musical ability. The director figured he could make a leader out of this bright student and signed him to the band.

Many of the youth wanting to take part in marching bands during the '60's and following years had a great advantage to learn from experienced instructors at band camps. A vast amount of information can be learned in a short period of time by attending these schools.

Ron Keslor's article in the Citizen Leisure, September 19, '65, described how Breece arrived at being a high-stepper. Breece attended Smith-Walbridge, a one-week training clinic for drum majors held at Syracuse, Indiana, during the summer of 1962. (Mrs. Breece is quoted:) 'He went to Smith-Walbridge with his baton still in cellophane. I thought he could do it, but Dad (Dr. Richard Breece) didn't know. I never dreamed it would go into anything like this.' "

After a week at the clinic, Breece returned to Sidney ready to try leading the high school band. He had learned the fundamentals of band leadership, including verbal commands, discipline, signals and band terminology. That first season as high school drum major Breece didn't exhibit any baton twirling. He was still learning. The next season, 1963, the youth returned to Smith-Walbridge for another clinic, probably one of the most fateful decisions leading to the OSU position that he was to make.

Link Harper, the drum major from Ohio State, attended that season as an instructor. This meant that Breece had the opportunity to learn directly from an OSU drum major before he enrolled in the University that he had already decided to attend. He said, "OSU was just a part of me. I had never thought about going anywhere else."

In 1964 Breece won an opportunity to try out for the assistant drum major's job when the former assistant failed to return to school. At 17, he became the number two man — an unusual honor for a freshman. In May 1965, Breece won the coveted drum major's post after tryouts with six other aspirants. During that summer he was asked to be assistant to Dr. Charles L. Spohn, band director at Smith-Walbridge.