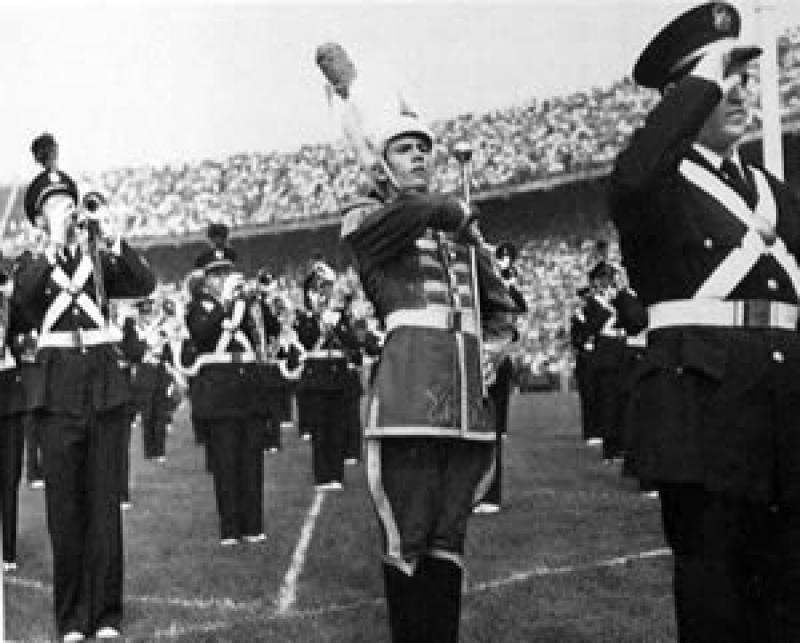 In the autumn of 1950 Dale W. York (OSUMB drum major 1950) was beginning to realize that he would never be able to fulfill his life long ambition: to become head drum major at OSU. Since grammar school days, he had been working toward this goal and was able to hold the drum major position for three years at Celina High School. But so far at OSU all he was able to get was an alternate trombonist position his first year and the assistant drum major spot the second and third. His only appearance on the field was at the 1949 Michigan game where he had performed with three other drum majors.

York's chance to become head drum major came suddenly when Jim Spencer injured his hand in the last part of September. The Lantern stated on Tuesday, October 10, 1950, "York realizes Ambition As Head Drum Major . . . The tall, thin figure in the scarlet uniform who maneuvered the Ohio State Marching Band at the football game halftime show is a substitute who made good in his own right."

Afterwards, York admitted that his success as a leader came not just from within but mainly from the spirit and cooperation of the men that followed him. He says, "It was sheer delight when the men shouted encouragement to me coming down that ramp, for those were tense moments before flag raising. Once my feet hit the field, I felt at home."

Rarely does an assistant drum major get the chance to perform during the pregame and halftime shows in the stadium. From 1922 to 1936 the nearest backup personnel came from the drum majors of the regimental bands, but they were not assigned to the football marching bands. In 1936 competition tryouts for the new post of assistant drum major were established. In the last 57 years only three instances have occurred in games when an assistant drum major has had to take over the responsibilities of leading the band. Tubby Essington became ill during the Ohio Wesleyan game in 1922 and was replaced by Jenie Lee Burke, a drummer, who carried a sword to give directions. Jimmy Spencer's broken thumb two weeks before the season and brought on his assistant, Dale York. Finally, Jack Swinehart replaced Kirby Wyatt when he became ill in the Homecoming game in 1967.