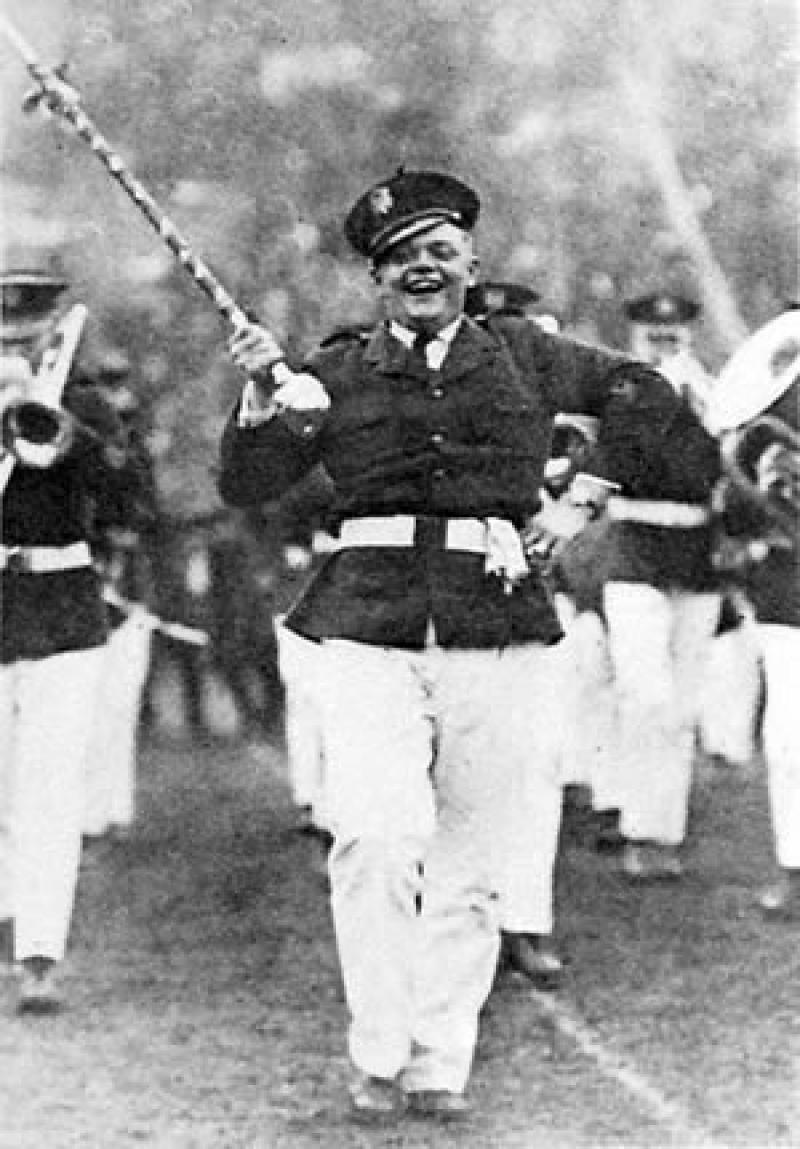 Showmanship, color and personality were first introduced in the OSU Marching Band by George Edwin "Tubby" Essington, OSUMB 1920-22. Prior to his time, the drum major's position was based on strict military discipline. Perhaps the thrill and excitement of the winning football teams sparked by All-American Chic Harley in 1919 may have helped to break the long-standing somber look and regimentation characteris­tic of military bandleaders. Essington's showmanship, cou­pled with smart execution of movement, established a tradition that has continued to this day.

In a letter written to Ben H. Kline in 1965, Ken Essington described his father: "I remember him as barrel-chested with apple cheeks, a broad grin and an embarrassingly high fore­head. He was once mistaken for Dwight D. Eisenhower. There is some resemblance, especially around the mouth. While a crowd-pleaser at OSU, father majored in making friends and bathtub shoe restorer. When things got slow he would visit an occasional Business Ad. class. As for his fame as a drum major ... well, we're a little biased. However, evidently he did leave his mark in the OSU stadium."

Countless stories have been told about Essington Bandsmen who marched with him testify to his outstanding leadership. Augustus A. Hall, M.D., was there and succeeded him as drum major. Hall said, "Tubby was a fun loving, very charming extrovertive type of fellow. He was a tradition at Ohio State even during his college days. He was also a ready wit."

Essington was born in Somerset, Ohio, and graduated from Newark High School where he played the saxophone in the symphonic band. Later the family moved to Columbus where his father, Dr. U.K. Essington, set-up a general practice. When he entered Ohio State, he became a member of the Phi Gamma Delta fraternity. His pals in the frat house recognized his showmanship abilities and persuaded Gus Bruder, then music director, to let Essington front the band.

Essington thrilled the fans that attended games on the old Ohio Field. He gave his best performances, however, when the band marched down High Street to the State Capitol for victory celebrations. He would prance before thousands of spectators with his head thrown back, chin in and belly out. He was never to be forgotten by those who witnessed his performances.

Jim Cummings reflected his impressions in the Columbus Dispatch, July 22,1963, "In the season of 1921, OSU defeated Chicago University 7-0 playing at Chicago. After the game, Essington almost literally turned the Windy City upside down, as he strutted through the downtown streets ahead of State's Band. Tubby attracted so much national attention with his cherubic clowning and strutting that magazine sports writer Walter Cheamp titled him All-American Drum Major in Col-liei's magazine, which used Tubby's picture on the cover in the fall of 1922."

Since the custom-made drum major's uniform cost several hundred dollars in those days, the military was not able to justify the expense, so Essington's suit was a gift from a Columbus insurance man named Grizzard.

The baton Essington used was very long and decorative. It something in excess of fifth inches in length. It was a iden stick trimmed with braid with a metal ferrule and el on one end, and a metal ball on the other. Tubby would i the baton in the old-fashioned military way — the wheel i forward, done with the wrist and executed very slowly. The baton was an essential instrument in directing a march-band at that time. It was held high to provide signals that'd be seen by the bandsmen. Essington added exaggerations not essential as signals that drew attention to him. The more animation he had with the baton, the more the spectators seemed to like it.

Hall, who followed him, said, "In reflecting on Tubby, one must remember that the early and mid-twenties were during prohibition years when the popular things were the hip flask, girls' bobbed hair and the Charleston. When Ohio Staters sang 'Ohio — Ohio', 'And when we win the game we'll buy a keg of booze, and we'll drink to old Ohio 'till we wobble in our shoes,' they meant it."

"He would, twirl his baton several whirls forward, sink his chin in his chest, stick out his belly and do his strut. Tubby did not spin the stick or do any dramatic baton tricks other than side spinning the baton and pointing direction for the band, such as a right turn or about face. He blew his whistle for band directions. He did originate the drum major strut so you have him to thank for all those sore backs and pulled leg muscles. All subsequent drum majors at Ohio State owe a great debt to Tubby for he was the first drum major there to give a flair and pomp to the Ohio State Marching Band."