Marching Band Off to Atlanta for Peach Bowl

Marching Band Off to Atlanta for Peach Bowl 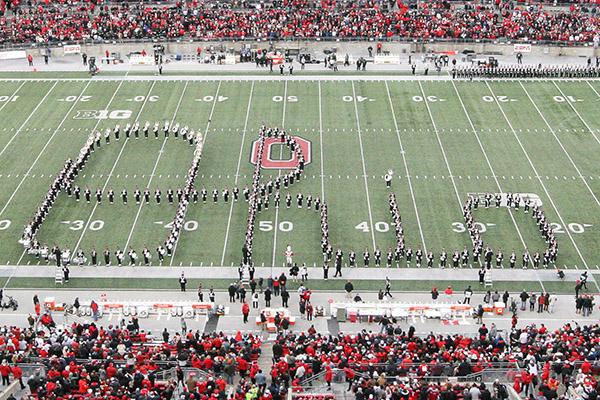 The Ohio State University Marching Band is going down to Georgia for the first time in its history, heading to the Peach Bowl to support the No. 4 Ohio State football team in its College Football Playoff game against top-ranked Georgia on December 31.

TBDBITL is leaving Ohio on December 29 and will return to Columbus on New Year's Day. Fans of the band will have a chance to see the group perform at least once during the first three days of the trip. A full schedule with the band’s public rehearsals and performances can be found below.

Marching band rehearsal on December 29 will be held at the Walden Athletic Complex. The venue's address is 320 Irwin St. NE, Atlanta, GA, 30312. Seating is extremely limited and will be available on a first-come, first-serve basis.

On December 30, the band will perform in Fan Night at the Georgia Aquarium, a ticketed event. Tickets can be purchased on the Georgia Aquarium website. Tickets are available online in advance only and cost $32.99 per person. The event is from 5-9 p.m. with the band's performance estimated around 7 p.m.

Game day will bring multiple chances for fans to see the band. The day will begin with the Peach Bowl Parade. TBDBITL will march the entire route from downtown Atlanta to the Georgia World Congress Center, starting at approximately 1 p.m. The route and more information is available on the Peach Bowl website.

After that, TBDBITL will take part in performances at FanFest at the Georgia World Congress Center. FanFest, which is a ticketed event, begins at 3 p.m., with the band's appearance expected at 3:50 p.m. More information on FanFest and $10 tickets are available on the Peach Bowl website.

Next up is the Peach Bowl itself. The band will perform at pregame and halftime. Before the game, fans should expect the band's "Floating Ohio" formation to kick things off, followed by a double Script Ohio. The i-dotters for the game will be Ethan Kowalski and Bradley Krak, who previously dotted the i before home games against Indiana and Notre Dame, respectively. Head drum major Austin Bowman will lead Krak's Script and assistant drum major Dalton Cararo will lead Kowalski's.

At halftime, the band will perform its "Grease at 50" show, which was originally performed at the game against Wisconsin in September. The show was a huge success, and the Grease social media accounts shared it immediately afterward. This version of the performance will be slightly modified for time constraints, but it will have four of the original five parts of the show.