Hello, piccolo! More than 70 piccolos to join TBDBITL on Saturday

Hello, piccolo! More than 70 piccolos to join TBDBITL on Saturday 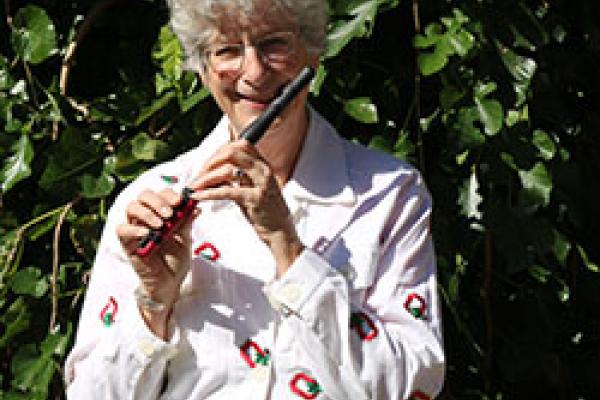 When the opportunity arose, Professor Katherine Borst Jones didn’t need time to think. How could she say no to this?

After all, it’s not every day piccolos get to perform with The Ohio State University Marching Band.

Jones, a flute professor at Ohio State since 1985, remembers the day last year when Director of Marching and Athletic Bands Dr. Christopher Hoch asked if she would be interested in some of her piccolo students performing with the marching band at halftime of a 2019 football game.

Jones said yes right away, and the idea quickly expanded from current Ohio State students to decades’ worth of alumni.

“Immediately I was just thrilled that he would consider including us,” Jones said. “There was just no hesitation. And no hesitation when I’ve talked about it with alums. They’re thrilled.”

How thrilled? More than 50 former students are coming back to Columbus this weekend just to perform “The Stars and Stripes Forever” on piccolo. They’re coming from all over the country — California, Texas, New York to name a few states — and represent more than 50 years of flute instruction at the university’s School of Music.

The event has turned into a full-blown reunion weekend featuring a Friday-night dinner, a rehearsal with the marching band and other festivities prior to the game against Michigan State. Including Jones’ 20 current flute students, more than 70 total piccolos will be on the field at halftime and in St. John Arena for Skull Session, and even more will be returning to Columbus but not playing.

With TBDBITL normally composed of just brass and percussion instruments, this will be a rare opportunity for woodwinds to shine in the stadium. They’ll close out the show with their performance, taking part in the final act of the marching band’s “One Giant Leap” show that will honor the 50th anniversary of the moon landing.

“You can’t get more classic piccolo than ‘Stars and Stripes,’” Hoch said. “It seemed like a natural closer to celebrate America’s achievements in this particular show.”

It’s not just the alumni who will find special meaning in Saturday’s performance. Current marching band member Nicole Conte, an Ohio State senior, is a flutist and instrumental music education major who has Jones as a professor. And even more special for Conte is that her mother, Marni, will be back at Ohio State to play piccolo as part of the reunion.

Marni was a member of the marching band in the early 1990s and a flute player under Jones, and Marni met her husband, Michael, in the marching band. Together, in Buffalo, New York, they raised Nicole to be a musician. After high school, she returned to her parents’ alma mater to get her degree and join the marching band playing the mellophone — an instrument she never touched until she got one as her 18th birthday present. When playing the flute, Nicole uses the same one Marni did when she was in school.

“It means the world to me because I grew up playing flute,” Nicole said. “My mom taught me flute in third grade, and both my parents and my grandparents and aunts and uncles were in the marching band, so to finally be able to take both of my passions and mix them into one, it’s a blessing honestly.”

As a part of the American Music Abroad program, Nicole and Marni have twice traveled overseas to play for European audiences. “The Stars and Stripes Forever” is always part of the repertoire.

On Saturday, mother and daughter will march again together playing that familiar tune, with Nicole playing her mellophone in the band and Marni on the piccolo.

“It’s amazing to finish everything out with my mom and with my professor who has taught me so much as a musician and a person, and also be able to look up at the sidelines and see Dr. Hoch who has shaped me since I was in high school,” Nicole said. “These people are constant rocks who have made me the teacher and educator I hope to be.”

“The Stars and Stripes Forever” is an essential song in any piccolo player’s arsenal. Nicole said she began learning it in middle school, and Jones has played it countless times including during a three-week tour of Japan with Keith Brion’s New Sousa Band.

Every piccolo player coming to the field Saturday will have it memorized, and none will be seeing it for the first time in their lives. Midway through the full song, the piccolos will get their turn to be the stars: a 30-second solo for their instrument.

“I can’t imagine how many times I’ve played it,” Jones said. “It’s a very significant excerpt in a flute player’s life.”

Jones won’t be sitting this one out, either. Years ago with Jon Woods at the helm, the marching band performed an Americana-themed show that included a drum and fife sequence. Jones’ flute students played those fife parts then with her looking on.

This time she’ll be on the field, performing with her red composite piccolo, surrounded by her pupils from the last 30 years and beyond.

“What better reason to have a reunion than to have a chance to play with the marching band on ‘Stars and Stripes?’” Jones said. “There’s a legacy of students through the years here and so many connections.”