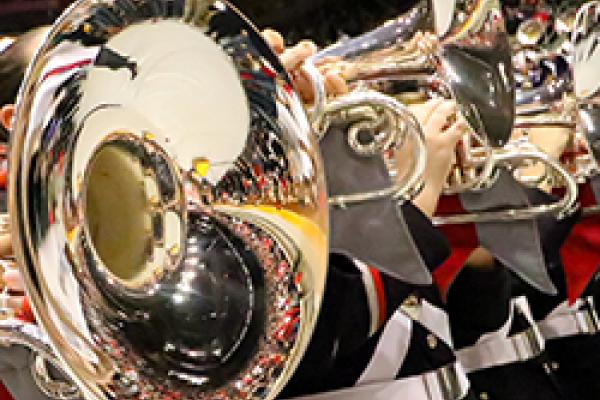 Twenty-six men and women just finished their fifth and final year with The Ohio State University Marching Band, wrapping up a tremendous half-decade experience that has taken them around the country and back.

From California to England, these students had unforgettable experiences as part of The Best Damn Band in the Land that helped them grow as people. Below is a list of the places they’ve gone and things they have done with The Ohio State University Marching Band. Some of the fifth-year students will also tell you what the band has meant to them in their own words.

Gordon Weiss, B Row, Assistant Squad Leader, trumpet
“I am certain that I would be a different person if not for being in the band.  Being a part of something much larger than yourself puts everything into perspective. The band has taught me  how special it is to be an extremely high-performing group at a business level while having an amazing group of people and friends underneath, and how important that social structure is to attaining what we are able to on the field.”

Andrew Carringer, E Row, mellophone
“Marching with TBDBITL has been central to my Ohio State experience. While studying, involving myself in other clubs and taking on jobs and internships, the band has always connected me to the university in a deeper way than any other individual activity. The traditions and history around this group has greatly and positively impacted my understanding of Ohio State.”

Bryan Hare, J Row, tenor drums
“The band has been my family for the past five years. During the season you’re with these people every single day through all the highs and lows. In that way, you get closer them than I think I would've to any other college friend group. TBDBITL has exposed me to the country and the world through all the travel we've done. I've seen the Atlantic and Pacific Oceans, London, New York, Los Angeles, Niagara Falls, and many other places all thanks to the band.”

Lindsay Hostetler, K Row Squad Leader, sousaphone
“The marching band has taught me I can do anything I set my mind to. I had a lot of obstacles in my way, but I learned how to pick myself up, how to push myself and how to lead.”

Taylor Thompson, K Row, Assistant Squad Leader, sousaphone
“TBDBITL has exposed me to very large network of people from a variety of backgrounds, both who are currently in the band and alumni. These people have helped me get jobs, have given me information on career paths, and have helped me get to where I am today. Being in TBDBITL has been an integral part of my Ohio State experience. The band has really allowed me to become a part of the Ohio State community. Because of the band, I have many fantastic memories of Ohio State events that I would not have gotten otherwise. There are many things like practicing inside the stadium, traveling across the country to represent the university, and meeting the football team that really makes the band experience quite unique.”

Cody Faist, K Row, sousaphone, i-dotter
“I came to Ohio State to be in the band, and I have loved being able to represent the great state of Ohio across the country when performing for thousands of people. Having Buckeye Nation supporting the band wherever we go makes me so appreciative for the opportunities I have been given. My love for Ohio State has grown exponentially because of my time in the band, and I am so grateful for the support the band receives wherever we go.”

Vijay Rings, Q Row Squad Leader, trombone
“TBDBITL has been my rock, keeping me sane in spite of all of my stressors outside marching band. The people I met over five years have been some of my best friends and gave me some of the best memories and stories. I wouldn’t trade these people for the world. The band has taught me how to have lots of best friends and to be available to people in need. I know how to be a leader among my peers, balancing my role as a squad leader and as a friend. In this way, I know now I can be empathetic and also firm in a hopeful career in healthcare.”

Daniel Brinker, T Row, Squad Leader, trumpet
“Being in the marching band has been so important to me for my five years. It built a network for my career that I already use while also giving me a family who’ve supported me in everything I’ve done. TBDBITL has taught me that I am able to do so much more than I thought I’d be able to coming into college. It showed me just how much dedication, hard work, and a positive attitude can accomplish.”