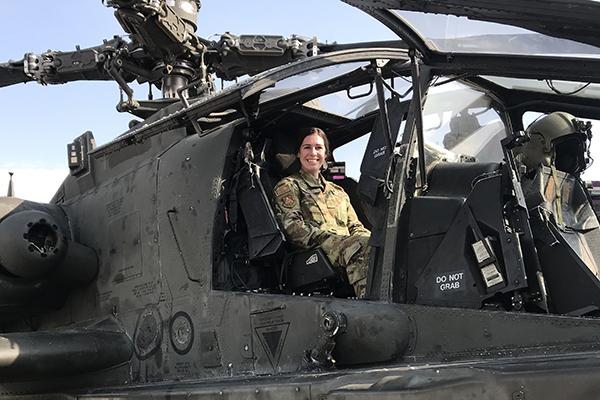 It wound up changing her life.

When Wood answered, the military recruiter on the other end was looking to get in touch with a different person. But Wood listened to his pitch. Entering the spring of her freshman year at Ohio State working on a double major in exercise science and criminal justice, Wood saw an opportunity to have her education paid for while taking part in something she had always been interested in but never seriously considered.

The military history and appearance of Ohio State’s marching band — originally formed as a ROTC band in the 19th century — was also something that intrigued the Toledo native when she became “obsessed” with the band in high school.

So that year, Wood made two major commitments: she joined the Ohio Air National Guard, and she vowed to make the Ohio State marching band as a bass drummer. They’re decisions that have taken her all over the country with the band and overseas with the Air Force.

It’s been a lot to juggle.

“I have been very lucky to have both sides work with me,” Wood said. “They have been lenient on both sides.” 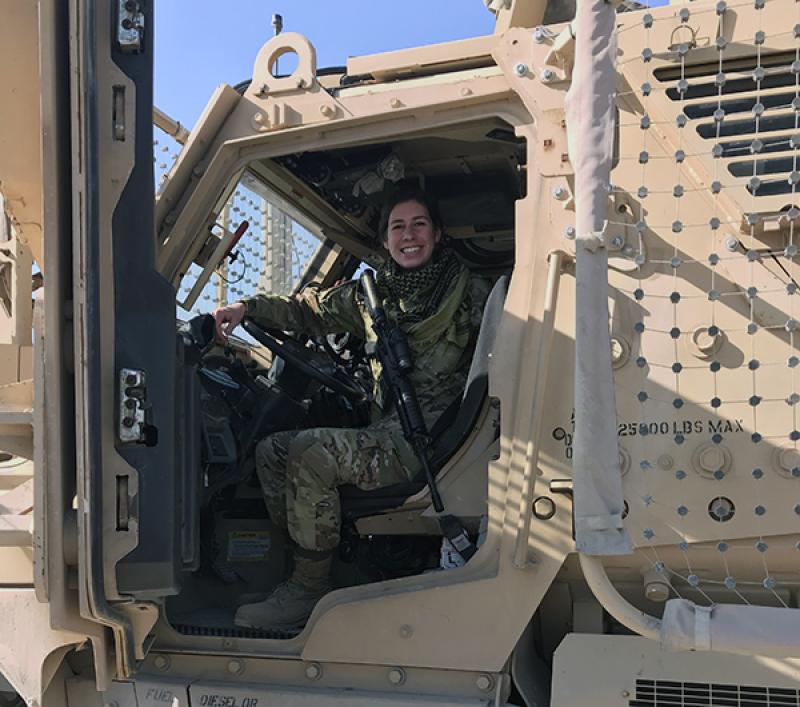 The Air Force and the marching band both have significant requirements of one’s time. Wood had to miss her fall 2016 semester — and an attempt at making the marching band — to take part in basic training along with active-duty Air Force trainees. Following her final exams, she completed technical school where she learned an Air Force trade.

All Wood asked was to learn a trade she wouldn’t be able to do in civilian life. So she was assigned aircraft maintenance, specially working with fuel systems on F-16 jets. Most of her coworkers were former mechanics or were experienced in that area. Wood was not.

But she learned the basics, even sitting through a “How to Use Tools” video made by Disney that taught trainees how to use a hammer and a wrench. She wasn’t intimidated in school, but when she became operational, that was another story.

“I saw the pilots get out of the jet, and it was kind of intimidating,” she said. “This isn’t just for play anymore. This is legitimate Air Force material. It’s serious now.”

In the summer of 2017, Wood returned to campus and successfully made the marching band on the bass drum. Originally a flute player who didn’t quite take to brass instruments, she got help from her high school band instructor and Ohio State percussion instructor Mark Reynolds on the band’s marching and playing techniques.

“Sarah has been one of the most determined students I have had the pleasure to teach,” Reynolds said. “Her ambition is through the roof and she never gave up her quest for knowledge. She showed dedication and commitment to a goal, and that’s why she’s one of the top marchers and players in our ensemble.” 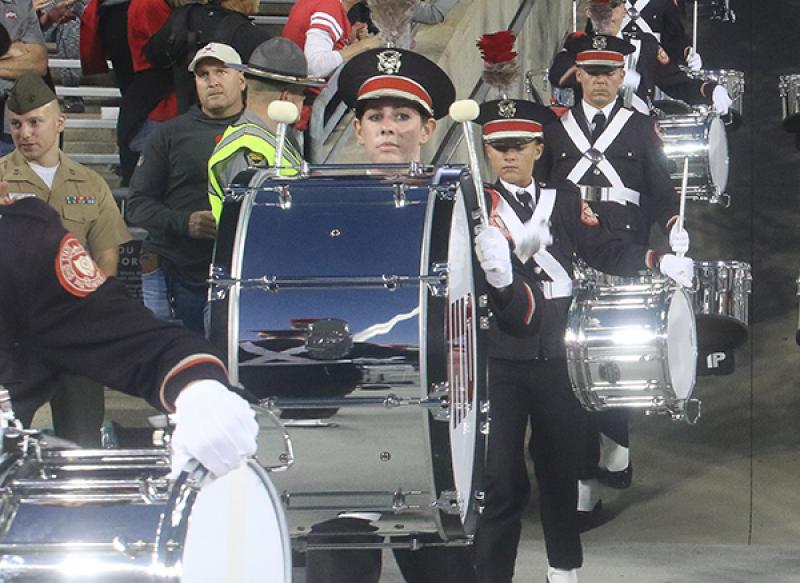 Shortly after making the band for the first time, another momentous event occurred for Wood: She met her future fiancé, Anthony Ellis. A recreational pilot, Ellis and Wood connected on their shared passion for aviation when they first met outside Wood’s apartment.

“We had an immediate connection and we could talk forever and didn’t stop talking,” he said. “I’ve never had such fluid conversation right after meeting someone.”

Ellis was always impressed with Wood’s ability to balance school, the military and the marching band, and she added another layer of responsibility in 2019 when she became a bass drum squad leader with the band.

Still a member of the Ohio Air National Guard, Wood had duties to fulfill. The military requires her to spend one weekend a month and two weeks per year in service, which always seemed to fit well with her band schedule. But there’s also the possibility of Air National Guard members being activated for a deployment.

In 2020, that possibility became a reality.

In October, just months after finishing her undergraduate degree, she was scheduled to for deployment overseas to Bagram, Afghanistan. A month before she left, after a fancy dinner downtown and a walk in the park looking at the Columbus skyline, Ellis proposed. Their wedding is set for May 2022.

“I wanted her to have something special to look forward to when she came home,” he said. “I didn’t want her going over there just wondering what was going to happen. I wanted her to have a good peace of mind knowing there was someone waiting for her back home ready to marry her.”

A few weeks later, aircraft maintenance went from a skill she honed one weekend per month to a job she was actively performing on a military base in a combat zone.

“We took our jets, we took our equipment and did the same job we do over here — just for real this time,” Wood said. “I felt safe but always very aware because it definitely wasn’t the U.S.”

After three months on the other side of the world, her tour came to an end. Ellis and Wood’s family got her flight number and went to the air base in Toledo to welcome her when she landed.

“I hugged her for like a minute,” Ellis said.

Safely back in Ohio, Wood still had plenty to look forward to. When she found out she would be deploying, she deferred her graduate program at Ohio State until this fall. She began her master’s program in anatomy in the College of Medicine in August.

And then there was the band. Having only been in the band from 2017-19, Wood still had two seasons of eligibility remaining. She had already been juggling the military and band with an undergraduate degree, so why not continue through grad school?

“I needed to finish out my five years,” Wood said. “I don’t want to just walk around campus. I would feel unfulfilled if I wasn’t in the band.”

She’ll feel an extra special connection to the band Saturday when it performs its halftime show honoring the heroes of Sept. 11, 2001, as well as recognizing veterans from across the country for their service and sacrifice.

But Wood will have to enjoy the show from afar, as her ongoing military commitment is causing her to miss being on the field for this performance.

It’s a sacrifice she’s more than happy to make.

“The 9/11 show is important to remind people what happened, especially considering our operation in Afghanistan was in response to that,” Wood said. “Coming back [from Afghanistan] and seeing this commemorated, it means a lot to me and I know it’s going to mean a lot to vets who see it on the field or online.”