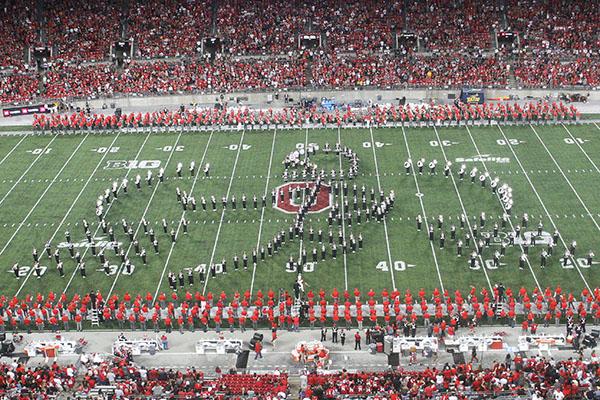 The Ohio State University Marching Band celebrated the 100th birthday of Ohio Stadium on Saturday with a rousing halftime show that featured the top 10 moments in Horseshoe history as part of a joint performance between the current band and the Alumni Marching Band. The groups came together to play some classic Ohio State songs and look back on the first 100 years of the 'Shoe.

The show opened with the current band in its Diamond Ohio formation, which it has been using since at least the 1930s. The band played "Buckeye Fanfare," formed a giant "100" on the field and then transitioned into an original composition from Jim Swearingen that combined elements of many Ohio State school songs. The band started its countdown of greatest moments in Ohio Stadium with #10, the opening of Ohio Stadium in 1922. The band then made formations of the Ohio State athletics logo before transitioning into a swaying bell. The countdown went to #9 as TBDBITL recognized the first ringing of the Victory Bell in 1954. The song ended with the band in a birthday cake formation, complete with lit candles.

The next part of the show featured a band classic in "My Town" by Michael Stanley Band. As the countdown went to #8 and #7 to recognize terrific performances by running backs Archie Griffin and Eddie George, the band formed a football player running across the field while also holding up jerseys of Griffin and George. The song concluded with a football player in a Heisman trophy pose and then the band spelling out "Go Bucks 100."

The two groups joined together after that, playing "Hang on Sloopy." The first edition of Sloopy, performed in 1965, was #4 on the countdown.

The show concluded with a joint performance of "Eye of the Tiger" as the band made formations of scores from famous Ohio State victories over Michigan from 2016 and 2006, the #3 and #2 moments on our countdown. The current band finished the song by forming into a football player stomping the Michigan logo, and then the two bands combined into an image of Ohio Stadium's north rotunda.

At #1 on the countdown was Script Ohio, which ended the full show. Four Script Ohios were formed on the field with Kamren Zirger dotting the i in the south end zone for the current band.

Fans can watch the entire halftime show on YouTube below.

The full pregame show is also on YouTube, featuring ramp entrances from the current and the alumni band as well as a joint performance of Carmen Ohio.