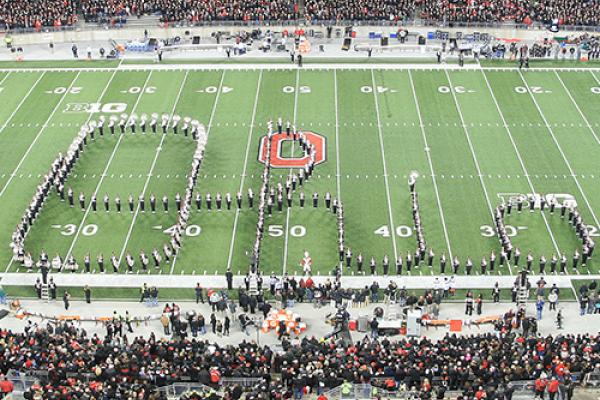 Through the concentrated, 18-month 100% TBDBITL campaign, Buckeyes came together to raise more than $8.6 million for marching band student scholarships. With this transformational impact to scholarship endowments for The Best Damn Band in the Land (TBDBITL), The Ohio State University Marching Band’s endowed funds, including future commitments, now total nearly $15 million — more than double what they were at the start of the campaign.

Prior to the campaign, the marching band only had resources to provide about half of its students with partial-tuition scholarships. With new support from 100% TBDBITL, future band students will see greater support than ever before.

“The Ohio State University Marching Band is one of our most cherished and time-honored treasures,” said Ohio State President Michael V. Drake. “The success of this campaign represents Buckeye Nation’s unique commitment to elevating the academic experience for our talented students and ensuring they have the resources they need to reach their full potential. We are grateful to our alumni, friends and fans for their generous support.”

The 100% TBDBITL campaign was launched in 2017 to recognize the exceptional hard work and determination of Ohio State band students, who commit 20 to 30 hours each week for rehearsals and performances on top of classes and homework. With little time left for jobs or paid internships during the autumn semester, many band students rely on student loans, and TBDBITL misses out on outstanding student-musicians who cannot afford the financial costs of college and marching band. As these students give 100 percent on the field and in the classroom, the 100% TBDBITL campaign was launched with the aspirational goal of providing all band members with some level of scholarship support.

“Every day, I see how tirelessly our band students work, and I know the sacrifices they make to be part of our tradition of excellence,” said Christopher Hoch, director of Marching and Athletic Bands and assistant professor in the School of Music. “Our marching band program is unbelievably blessed to have this unparalleled support from our alumni and fans. Every time we take the field to perform, we hope to do them all proud.”

100% TBDBITL ran from July 2017 through December 2018 and included participation from 2,440 donors, including Ohio State and TBDBITL alumni, friends and fans. To amplify the impact of band scholarship endowments, Ohio State, in perpetuity, will match the annual endowment distribution on gifts made during the campaign to the 100% TBDBITL Endowed Scholarship Fund and on new band scholarship endowments created as part of the campaign (including on multiyear pledges of up to five years) — effectively doubling the impact of endowed scholarship giving.

The honorary co-chairs of the 100% TBDBITL campaign were Jack and Barbara Nicklaus — lifelong Buckeyes and fans of the Ohio State Marching Band. In 2006, Jack became one of the very few non-band members given the opportunity to dot the “i” in Script Ohio in recognition of his longtime commitment to Ohio State.

Alumni and volunteer leadership for the campaign came from the TBDBITL Alumni Club and the 100% TBDBITL volunteer committee. Both groups were dedicated champions for promoting the need to support band students and maximizing opportunities for university matching funds.

“On behalf of the 100% TBDBITL committee, we thank Buckeye Nation for their support of the students who are ‘The Pride of the Buckeyes,’ on the field and in the classroom,” said Alex Nicolozakes ’85, ’89 MD, a former alto horn member of the band and chair of the volunteer committee.

The 142nd edition of The Ohio State University Marching Band will take the field in Ohio Stadium on Aug. 31 as the Buckeyes take on the Florida Atlantic Owls in the 2019 season opener.